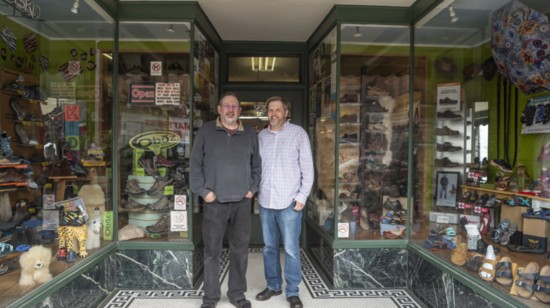 Take a Stroll in Our Shoes

The up-from-the-bootstraps history of Hide & Sole

The history of Hide and Sole is as unique as the downtown this iconic Missoula business has called home for the last 40 years.  In 1972, owner Scott Sproull was 19 and on a break from school at Western Illinois University following the trail of Lewis and Clark out west.

“I had 100 dollars at the time,” said Scott. “I knew I would run out of gas and when I did I would get a job.” Hovering on empty outside of Missoula, he noticed Sacajawea Park on the map and thought, “That’s a sign.”

For the next two weeks, Scott lived in his car and eventually got a job at the Burger Spot, where he got to know Bill Wilson, one of the owners of the Woven Leather Duck—a shop across the street in the Roxy Theater that sold weavings and leather goods. Bill suggested Scott come by to learn how to tool belts and make the merchandise found in the shop, which he did, thus beginning a long future in the leather business.

The business eventually moved to the Hippie Block, or what is now known as the Hip Strip, and changed its name to Cow Haven. The years passed by and eventually Scott bought the store in 1975 for $3,000 and changed the name to Mostly Leather.

The store’s current incarnation came about in 1979 when Scott moved the store to the present location on Higgins Avenue and changed the moniker to Hide and Sole to represent the leather and shoes that he still sells today.

“It took a good 10 years before I felt like I knew what I was doing and how to run a business and make real money,” said Scott. “And what happened in that last 10 years was I found footwear.”

Scott grew tired of making custom footwear, which was difficult work for little— if any—profit, so he looked around for another high-quality shoe that he could sell at the store and found Birkenstocks. He first began selling the famous sandals after a year of saving up to afford their $1,000 minimum order. Today, Birkenstocks are still a staple on the Hide and Sole shelves.

Now, in 2019, Hide and Sole is once again in the midst of change. You could refer to the store as a “family business” in that over the years three of Scott’s four children have worked there at some time. Now his youngest son, Shawn, after working at the store for 12 years, is preparing to take the reins from Dad. Scott said he never put pressure on his kids to take over. He was truthful about how tough the retail business is and always kept the reality alive that you could be wiped out in an instant. In fact, Shawn had avoided the store for 30 years and worked at several local businesses in the hopes of finding a permanent place. But during one of the weekly basketball games between father and son, Scott made Shawn “an offer he couldn’t refuse.”

Today Hide and Sole carries an inventory of around 6,000 shoes covering several different brands that always keep up with Scott’s high standards such as Dansko, Born, and Chaco.

“To this day, everything we sell is superb leather, superb craftsmanship,” said Scott. The “Hide” side may be less than 10% of the business, but it is still a very important part, and Shawn and Scott take pride in the fact that they have helped many local artisans get their start in the leather business.

Shawn was quick to say, “It’s still part of our roots, part of our name.” The leather hides are used to make a variety of items from jewelry, belts, clothes, and wallets and to reupholster furniture.

Hide and Sole’s success is well worn within the Missoula community because of Scott’s basic business philosophy.