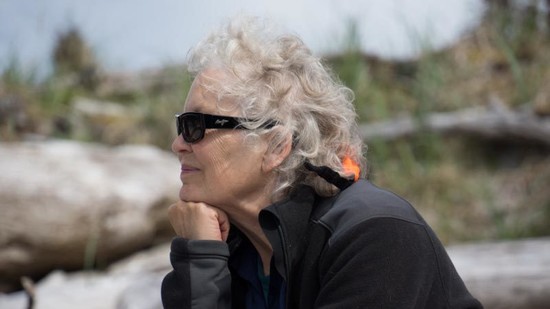 Whatever blows your skirt up.

Judith Fraser has some stories—funny ones, hellish ones, heart-wrenching ones.

For this comical line, she’s referring to what somebody once told her when she was about to do something a little adventurous, off the beaten path, just like her father—the man she inherited her curiosity for the natural world from.

Her face lights up when she mentions her granddaughter as we talk about the old photos she had tucked under her arm. A few of them have her son in them—a bouncing baby boy—and in one photo he’s wearing a cashmere hat that Judith made from the sleeve of a sweater. They’re sitting outside of a tent with their adventure dog and her baby boy is only a couple months old.

Adventure is the backbone of Judith’s life, having spent her childhood exploring Hawaii, following the lip of a volcano on one or more occasions. Her father’s advice to her was to learn as much math and science as possible, and to spend time outside. And so she did, completing a Master’s degree in Environmental Studies and pursuing a career as a wilderness ranger. So many of her days were spent in the wildernesses maintaining trails and Wilderness conditions. In 1991 she became the Anaconda-Pintler Wilderness coordinator and then the Program Manager for Wilderness and Trails, overseeing 1,500 miles of trails and 750,000 acres in three different Wilderness areas.

Once, Judith heard a noise so grand and escalating that she thought a string of pack horses got loose. Around the corner came a moose, followed by a large wolf. The moose got away by putting Judith in the middle and the wolf disappeared behind the rocky backdrop. Of all the memories Judith has banked on the trail, this one still carries the fresh scents of that day.

The promise of adventure is a written one, at least in Judith’s experience. When she and her family traveled from the East coast, her father had hand written a letter to her, letting her know that the days ahead would be filled with exploration and nature. And that’s something Judith wants to pass down to her granddaughter—the promise of wonder.