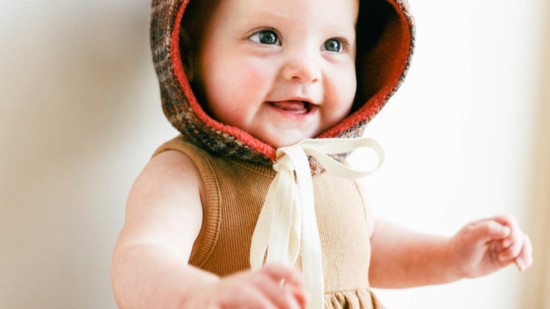 We’ve all heard it said, “It takes a village to raise a child” and that’s exactly what you get when you walk into Hazel & Fawn—a village. Located next to Clyde Coffee on the Hip Strip, this baby boutique is women-owned and operated. Previously known as La Stella Blu, the shop specializes in chic and eco-friendly gear for the whole family.

Katie Albritton is the owner and chief of this village. What started out as your typical mother-struggling-to-go-back-to-work-while-raising-a-newborn has morphed into a thriving business that benefits not only herself and her family but the rest of us, too. Thirteen years ago, when Ergobaby first began selling its infant carriers, people often stopped Katie to ask her where they could get one. That’s when she realized there was a need for better baby gear. She started a website that specialized in selling carriers. Those carriers first filled a closet, then her garage until finally a commercial space. Today Katie sells so much more than just carriers.

Second-in-command is Jen Hildebrand. Jen is who you will most likely meet first when you walk through the door. She is bright and bubbly and very clearly loves her job. She was introduced to Katie through a mutual friend 6 years ago right after the birth of her third child. Working for Katie allowed her to be a mother and still work. Her kids literally grew up within the walls of the boutique. In fact, her youngest son personally designed the Holtziger wooden animal set, complete with cut out felt backdrops.

Katie personally knows her customers not only by name but she remembers their children's names like most of us remember people by their faces.

Katie said, “There is never a day when I don’t see someone I recognize”.  She can show you pictures on her phone of the baby she held yesterday while mom shopped (village work at its finest!)

What Hazel & Fawn offers in relationships extends beyond their employees and customers. Their vendors are their villagers, too, just like their customers. You can point to any merchandise in the store and not only will Katie tell you the name of the owner (and their children) but also their story.

For instance, Katie met Nicki Radzely from New Jersey at a trade show. Nicki was first seen on the popular show Shark Tank. She created the Pop Pacifier, which looks like a large bubble. The act of sucking draws the nipple out, so when baby drops it, the nipple instantly retreats back into its bubble. It stays clean because it can never touch the ground. The story of how Nicki went from an idea to selling in stores like Hazel & Fawn is one that Jen seems personally proud of because they’re all part of the same village.

There’s also Melanie Knight, owner of Starry Knight out of Corvallis. She started making baby loafers and toddler shoes because it was something she could do while her babies napped. Now she’s a full-fledged business that employees four part-time employees and three seamstresses.

Jen said, “We love moms with a side hustle.”

The store opens its arms not only to mothers and fathers but also to family and friends looking to purchase gifts. Katie recommends tiny baby gear such as teething necklaces and the aforementioned Pop Pacifier for infants. For toddlers she endorses any kind of make-believe play like their Plan Toys Dentist Role Play Set, which not only lets kids pretend to be a dentist but also teaches them proper dental hygiene. For older kids, she absolutely loves the Little People Big Dreams books that are illustrated to appeal to children while also inspiring them to follow their dreams. The subjects include everyone from Coco Chanel to Bruce Lee to Marie Curie to Ella Fitzgerald.

Hazel & Fawn has a large on-line presence as well. Villagers near and far can purchase the best in baby gear, knowing that everything they sell is designed “to make your life easier” according to Jen. And that’s the very definition of a village.