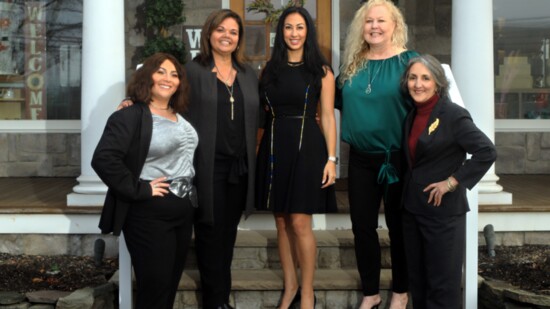 Five amazing women dream of a better world - and are doing something about it.

Catherine Rabidis has been saving the world since she was 23. Ironically, she didn’t find her true purpose for doing that until she left her job working overseas for the federal government, taking on global issues. Now she’s making an immediate impact on the world on a far more personal level.

Along with a colleague, Catherine began reaching out to people in low-income communities who typically don’t have access to financial advice.

“Anyone can participate in the system. It’s not just for wealthy people, or middle class people,” she says. After going to an inner-city church and talking to people after the service, she found something that was disturbing to her. “People were being exploited, even within their own communities.”

For Catherine, it’s a matter of trust. What starts out in bringing people information, contacts, and resources for improving their financial lives opens it up to so much more. The people she helps become family. People invite her into their homes and lives. She’s gotten pictures at 4AM of newborns. When that happens, she knows she’s made a difference.

Jeanie Kalas is a doer. She’s not one to sit around and wait for someone to start something if there’s someone in need. She won’t pass up an opportunity to be a blessing for someone else.

She took the uncertainty of 2020 head on, pushing store managers past company-imposed limits to help Family Promise of Morris County feed local families in need. She gloved up and masked up, straight through the lockdown that kept so many so desperate.

But there’s so much more to what Jeanie does. From backpack and coat drives, organizing church events, even leveraging the family business to build a soup kitchen, Jeanie’s first concern is for the greater need.

For this proud wife and mom, it’s not enough to just do it. She says that you need to encourage the next generation to give back. It needs to be part of their belief system. It’s not for the accolades. And she’s far too busy to sit still for a pat on the back.

The biggest thanks you can give Jeanie? Get involved. Never pass up your blessing.

Clelia Pergola knows the anguish felt by caregivers firsthand. She even wrote a book (Life, Lessons, & Legacy) about her experiences as a caregiver, having lived through it herself taking care of her Nonna for six years.

But that’s hardly the first time that she’s taken pen to paper to use her experiences to help others navigate problematic circumstances. Her first book, The Law Firm Revolution, ended up being a roadmap for law firms, sharing the processes and knowledge built consulting for a large number of law offices.

Although she’s not a lawyer, Clelia’s helping to reshape the estate and eldercare legal landscape, now through a firm that she grew with her business partner, Eric R. Goldberg, CELA, at the NJ Elder Law Center at Goldberg Law Group.

Clelia’s passion goes further than seniors and caregivers. She’s also involved with a number of women’s groups. “We’re challenged with a lot of issues. Struggling to make us feel like we’re doing a good job, where is our ‘seat at the table’, our mental health, managing our home life - including taking care of our aging parents. So many issues that women face where we need encouragement and resources. Admitting where you’re weak is hard, and as soon as you can do that, the floodgates open. And that’s when you become successful.”

Now you know Clelia's passions. And there's something else that you should know about her - she's a willing resource. Reach out to her at her office. The person on the other side of the phone might just change your life for the better.

Michelle Vernuccio is a very passionate and energetic person. She’ll gladly tell you that. One of her gifts is connecting people. So along with her lifetime of marketing experience, it’s only a universal truth that she was destined to fall in with the North Jersey Chamber of Commerce. She’s now the president. But she’s reluctant to bring that up.

She’s simply a problem solver, a human connector. And she has over 900 members — 900 bosses, as she explains — to make happy.

Her other passion has been fulfilled as an adjunct professor at Montclair State University’s School of Communications and Media, working with students who have internships in digital marketing. So it’s not just today’s professionals that Michelle’s impacting — it’s also the next generation.

And she’s not just having a local impact - she piloted a new program of connecting Chamber members across the region through Zoom networking meetings to share ideas that could work anywhere. No one else was doing this, but for Michelle, the natural connector, it was an opportunity to find new people and new ideas.

She’s using marketing creativity to change the world, one business at a time. Not just as it is now, but as the world moves forward into an unseen future.

“I’m a firm believer that everything happens for a reason and that there’s a path for all of us. I’m fulfilling my passion, it’s not just a job. I love waking up in the morning knowing that I’m going to make a difference in a professional’s life. A great team starts with you.”

Judy Rosen is a born teacher. When she was five years old, she sat down at a chalkboard and started to teach her baby sister. By the time her sister entered kindergarten, she already knew her ABCs and could add and subtract.

She began her adult teaching life with the Berlitz language company to teach French, leaving to become a mom. But she’s a doer. So with more time to spend, she began to throw herself into volunteer work, eventually launching her own private French, Spanish, and culinary children’s programs that gave her flexibility — and also success. But she didn’t stop there. She became certified as a teacher in the culinary arts, landing in the field of special ed.

And that brought her to the Essex Valley School, a therapeutic, vocationally driven alternative school for children with needs that can’t be met by a traditional public school. But it’s so much more than that. It offers kids a second chance at success. Judy became a certified cooperative education coordinator, and every day helps her students as they begin to transition into post-school life. She’s still working her educational miracles that she began so long ago.

“Seeing a student succeed warms my heart. They’ll come to me and say ‘I appreciate you.’ What teenager would say that? That’s when I know just how much this means to our kids.”