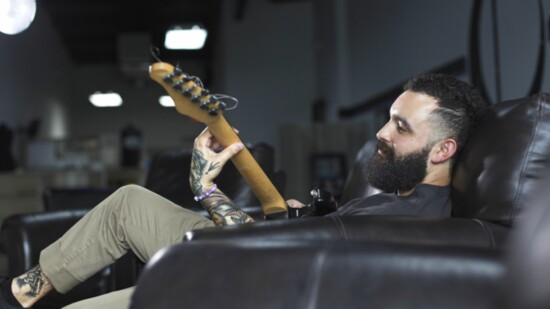 The art of storytelling

Steven Gabriele, Jr is a storyteller. He listens intently, dives deep into research, studies detailed photographs for hours, then creates a drawing that brings a memory to life. Forever and ever. Steven is a tattoo artist, working from his luxe studio in Naples, Catharsis Tattoo.

He designed the Cartharsis Tattoo studio with polished concrete floors, a handsome pool table, dart board, tv, bar and killer audio system so that his clients feel comfortable and at ease. Considering they spend at least two full days face to face (or skin to needle) with Steven, he feels it’s crucial that the space is as welcoming as it is inspiring.

Steven is unique, working only in black and grey realism and portraiture. Childhood pets, immortalized forever on a forearm are poised, ready to leap off the arm, out of Steven’s drawing. A father’s thumbprint, blown up to the size of a salad plate and inked by Steven on an upper arm reminds the son of the man who raised him.

Tales of a fantasy world, tributes to loved ones, and personal emblems of hopes and dreams come to life under Steven’s watchful eye and careful tooling.

Michael Walker is a Naples High School graduate, former player with the Jaguars, currently a free agent and living in Naples. He researched his Walker family crest, with contributions from both parents and created a design with Steven that others from the Walker clan will now likely use for tattoos. “Steven is so talented, personable and down to earth. The studio has a dart board, pool table and tv - he handed me the remote and got down to business,” says Walker. “His work is second to none.”

Brandon “True Grit” Thompson is a mixed martial arts fighter living in Naples and followed Steven from his previous studio in Pensacola to Catharsis. “I tossed ideas around before an idea finally came to me. I wanted a realism samurai piece on my calf. I reached out to Steven, and we had plans made and set pretty quickly. We worked on this piece for 18 hours, with hardly any breaks. It is without a doubt, my favorite tattoo that I have,” says True Grit. “Steven isn’t just a great tattoo artist, he’s also a great conversationalist, motivator, intellectual, and great friend.

A native of Rhode Island, Steven and his wife Kyleigh Miller, and their four-year-old daughter, Kaia moved to Naples to be closer to his parents, Steve and Paula Gabriele who helped make Catharsis Tattoo possible.

When he came to a crossroad after an abbreviated military career, he learned the art of tattooing as an apprentice, first working with paper and pencil. Now, he uses a digital illustration app that offers artists powerful and intuitive design tools, allowing him to fine-tune a drawing to look entirely realistic and always one-of-a kind.

“We start with a consultation, at least a half-hour and sometimes longer, to go deeper into a story to generate ideas and hone the client’s inspiration. It can be very profound,” says Steven.  “The most rewarding part of my job is helping change someone’s life in a positive direction.”

On average (and he hates to use that word), he spends 20 hours to ink a tattoo, following 4-5 hours of design time and another hour or so to set up and tear down after an appointment. “I have heard that people look at tattoo artist like a counselor, spilling out secrets. There’s a lot of trust since I’m putting something permanent on them,” he says. “There are so many elements, variable, it can be a draining process. But, always rewarding.”

His clients range in age from young and aspiring to professional athletes and senior citizens. “Older skin is rougher and thinner, with less elasticity. I understand the intricacies of working on older skin and that less is more.  It’s never too late,” he says.

At Catharsis, only one client is in the studio at a time, with appointments and communication only through email: CatharsisTattoos@gmail.com or through the booking link at CatharsisTattoo.com .