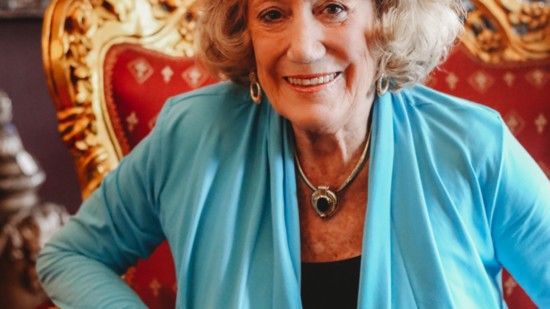 Queen of Estate Sales, Ruler of The Cottage and true Southern Belle

Bernice Denton, age 50 and holding for a score of years plus some change now, leads the man, a local cosmetic surgeon with a passion for antique train sets, into a home full of antique train sets. The owner has passed and the heirs have asked Berenice -- middle Tennessee’s undisputed “Estate Queen” -- to make the house her realm and do her thing. She guides the surgeon to the basement where antique trains of every description line the shelves and then reaches up at random to pull one down. She holds out her hand. In it is a live hand grenade. Whoops.

“We could have met our demise,” Berenice exclaims.

And it wasn’t even the first live hand grenade she had come across during the course of her official duties either. Ruling as middle Tennessee’s Estate Queen entails moments of risk and surprise. One can just never tell what some folks have left in the building after they have left the building, so to speak.

“Oh, there was the time I found the dead boa constrictor in the freezer,” Berenice recalls. (Only the Nashville native pronounces the words ‘con-STRIC-tuh’ and ‘FREE-zuh’ in her charmingly euphonious, deeply authentic and increasingly rare South Midland drawl.)  “It was coiled up and frozen solid, the beloved pet of the man who had passed.”

However, even with her formidable sales skills, Berenice did not find a buyer for the deceased man’s snake-sicle. There are limits. But she has appraised and sold just about everything else, including Chi Chi Rodriguez’s helicopter and Barbara Mandrell’s Rolls-Royce.

And she is not exaggerating either. Once, in 2001 as country star Waylon Jennings was receiving treatment in Arizona for an illness, Berenice oversaw the sale of some of his belongings. Some fifty to sixty would-be buyers of Outlaw memorabilia packed his Nashville home when a belt buckle on display suddenly went missing. Berenice wasn’t having it. She barred the doors and would allow no one to leave until the belt buckle was returned. It was one woman’s will against the plans and dinner reservations of some four to five dozen strangers.  They didn’t stand a chance. In the end, the standoff was resolved by Waylon Jennings himself. “Berenice,” the gritty baritone said to her over the phone. “Let my people go.”

Berenice shares these and other anecdotes from her decades of estate sales experience from the comfort of a beautiful couch in The Cottage, her extraordinary consignment shop on Charlotte Pike. With the air fragrant from artisan candles and handcrafted soaps and room after room adorned with unique items and delightful gifts -- baby, kitchen, jewelry, apparel, furniture and home accents -- The Cottage is a true Nashville treasure, a consignment of refinement center since August of 2015.  Along with Laura Vandervoort, The Cottage’s manager who has been with Berenice for twenty years, The Cottage provides a convenient online shopping experience, but is simply best experienced in person.

"When you come in," says Faye Chiles, a longtime friend of Berenice’s and a Nashville native herself, "everybody knows you."

But, if Berenice doesn’t know you yet, she soon will upon your first visit.  Her warm hospitality is not an act; it is simply who she is.

“I love people,” Berenice says. “And I can also give them ideas on what they can and cannot sell,” she adds with a mischievous grin.

Berenice celebrated her 61st anniversary to Jim “Yogi” Denton this Christmas. She has four children, thirteen grandchildren and two great-children.

“Something finally made me great,” Berenice quips.

To experience her greatness for yourself, stop on by The Cottage and sit and chat a spell.  You’ll be glad you did.

Because she constantly brings to market unexpected treasures, Berenice gives locals a thirty minute head start to purchase any desired items before they go on sale online. To view The Cottage's items of what will be coming up for sale, send a request to join the list at info@berenicedenton.com