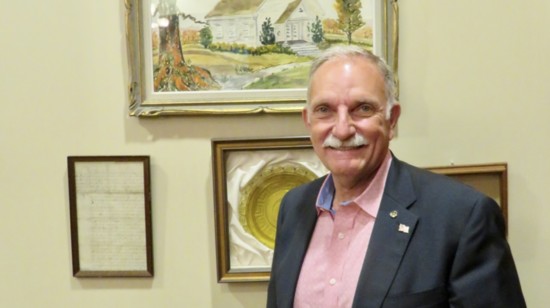 "Under the Hood" with Rhea Little, Brentwood's Mayor

For many in Brentwood, the names Edmondson and Wilson merely conjure pictures of street signs along two of the busier thoroughfares. But for Mayor Rhea Little, those same signs are invitations to trips down memory lane, to revisit his boyhood and a time before Brentwood was even incorporated. He recalls the horse and dairy farms that dotted the land with very few buildings to block the view of the WSM Tower, the giant landmark that, even during Mayor Little’s childhood, had seemingly stood there forever.

“Brentwood has grown more than 10 times over since I was a boy,” Mayor Little observes in his gentle and deeply authentic Southern drawl. “Back then, it was almost a game to figure out how everyone was related. But Tommy Edmondson still lives on Edmondson Pike, and Tommy Wilson still lives in the Oak Hall House.”

Mayor Little knows them well. He knows lots of folks in Brentwood well. Born here in 1962, his family’s roots stretch back to 1790 when his great-great-great-grandfather received a land grant for his service in the war—the Revolutionary War. He settled off Concord Road and Edmondson Pike, land that remains in family hands.

“It was a very rural area,” Mayor Little observes. “A big night out in Brentwood was dining at The Squire’s Table.”

And what would the youth of Brentwood do back then for fun?

“We would lob water balloons down on the passing trains,” Mayor Little admits with a grin, the statute of limitations having long since passed.

But minor mischief-making aside, the mayor’s idyllic boyhood provided a foundation of faith and taught him the importance of community and the nobleness of work, which are values he now incorporates into his role as a public servant for Brentwood.

“I felt called to serve,” Brentwood Mayor Rhea Little says. “And I’m not alone. We're blessed to have a lot of public servants here, citizens who excel in their fields and who work together to help make Brentwood a community of excellence. We should all realize how blessed we are."