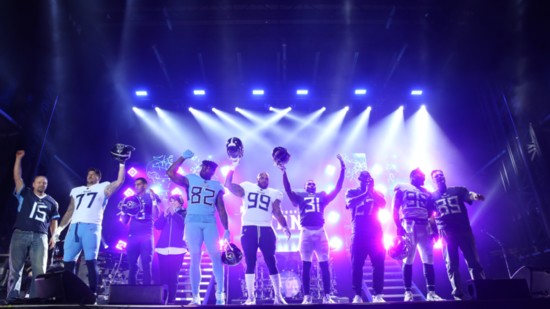 Sharper Style 'Titans' Up Our Team

Putting on the Blitz with New Uniforms in the 615

It was a spring fashion show for the fall season, but a mere catwalk would not suffice. Instead, a stage was needed, and a titanic one, too. Because upon it—and before a packed crowd standing shoulder-to-shoulder downtown last April—stood a group of larger-than-life hometown heroes: Jurrell Casey and Taylor Lewan, Kevin Byard and Delanie Walker, Brian Orakpo and Marcus Mariota. Each man his own person, each man blessed with his own particular skills and abilities, but each man also fused into a single, cohesive unit through the power of teamwork and the magic of style.

It was the unveiling of the Titans’ new uniforms, a preview of the team’s seriously sharp new look. The crowd went wild. Let’s take it from the top, starting with the helmet. Gone are the two blue stripes, replaced by a single slash of two-toned silver. It’s a sword, a symbol that runs throughout the new uniform. The inspiration? Think Titans of Greek mythology, the primordial gods who battled the Olympians in what were arguably the first Super Bowls, a series of epic struggles called the Titanomachy. Also, think Parthenon and Nashville as the “Athens of the South.” It quickly becomes clear that the ancient Greek theme to our city predates even Music Row and hot chicken. Hence the sword element, appearing as well on the shoulders of the jerseys along with “sheaths” on the sides of the pants.

But there are more than swords here to meet the eye. After all, we are not the Nashville Titans; we are the Tennessee Titans. To honor this, three red stars, symbolizing the three regions of our state—west, middle and east—are sewn into the back of the jerseys’ necklines as well as appear inside the fireball logo. As for the angular fonts of the numbers, not only were they inspired by Greek lettering but also by the geography of our state. (Yes, those sharp points at the top right of the numbers are a shout out to y’all in the Tri-Cities, northeastern Tennessee.)

The players’ approval of the new look has been, shall we say, absolutely uniform. Not only is the style sharper, but the pants and jersey are 29 percent lighter, a huge improvement made possible by an advanced technology called laser perforation. It allows for more breathability as well, a fact that will no doubt be greatly appreciated in the early games of the season when the sun bears down and it’s 100 degrees on the field. The Titans’ new look is outstanding, and expect to see the colors bloom from the stands as hordes of loyal fans don the new jerseys themselves. But let’s face it, there’s something irrational about the capacity of colors to elicit our excitement. It’s as though, along with the visible threads, there are invisible ones as well, strings of memes that weave our hearts into the fabric of team, allowing us not just to watch the Titans play, but to join them in that play. And that is why we cheer. So go Titans! It’s going to be a sharp season, y'all.