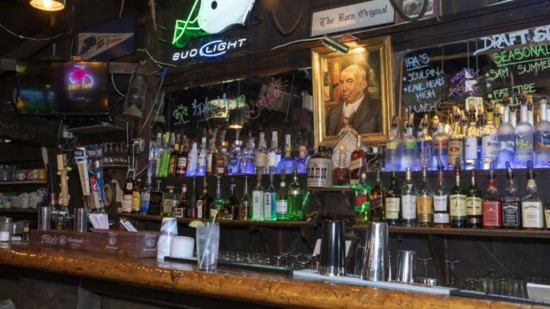 Carved into the Community

Turn by the Mailbox to Go Back in Time

When you are in the mood for some amazing ribs, a juicy burger or perhaps just want to catch the game on Sunday afternoon, take a slow ride down Sicomac Avenue in Wyckoff until you see a mailbox labeled “The Barn.” Turn into the gravel parking lot and step back into a bit of Wyckoff history.

In the early 20th century, Sicomac Avenue was the main traveling route toward New York City. During the Great Depression, the Weinstein family’s original 150-year-old barn was used as a teahouse and “rest stop” where locals would sell apple pies to travelers in order to make extra money. When Matt Weinstein’s Paterson car dealership went bankrupt during the Great Depression, he decided to convert the barn into a restaurant. The Prohibition movement attracted Paterson’s silk factory owners to the establishment, resulting in notoriety for the Barn as a speakeasy. The silk manufacturers had the money and the means to enjoy a detour through Wyckoff for a little revelry while escaping the alcohol ban. Rumor had it that dancing and gambling were part of the nightly entertainment, and homemade applejack from the local orchards was the drink of choice. The jury is still out, however, on how Matt’s Dutch Reformed, teetotaler mom felt about that! After Prohibition ended in 1934, the Barn received Wyckoff’s first liquor license.

This year, The Barn is celebrating 90 years of serving hungry residents and travelers and is still going strong. It’s known for its simple character, rustic charm and of course, the generations and generations of initials, names and dates carved into every wood surface throughout the restaurant. The carvings are a symbol of the years the Barn hosted community and family gatherings and are always a talking point for customers, especially those who want to check to see if their own “engravings” stood the test of time. Vintage furnishings and decor join original features like the bar constructed from an old wagon, the hitching post railings and booths which are reimagined livestock stalls.

The establishment peacefully exists within a residential neighborhood with “grandfathered” property status because it was there long before almost anything else existed along Sicomac Avenue. The only sign permitted is the little mailbox, which adds to the charm that celebrates days gone by.

Owner Eli Batin is a U.S. Navy veteran who owned several jewelry stores before becoming a restaurateur. In 2001, he was living in Clifton when his brother-in-law tipped him off that the restaurant was for sale. Eli went to check it out, fell in love with it, and immediately got the deal in motion to buy the business. He later purchased and renovated the existing house next door and moved in.

The Barn is known for its generous portions, warm hospitality and famous baby-back ribs, and Eli puts a big emphasis on serving fresh, high-quality foods.

“I do not serve any food that I would not eat,” he says. “If something is below average, I will not eat it and I will not serve it. I use only top-quality meats and fresh Idaho potatoes. They are cut daily, blanched and fried again before we serve them to our customers so they are cooked perfectly. Most of our sauces are freshly made in-house as well.”

In the past, Eli has been approached with inquiries of selling the Barn but always turns the offers down.

“The people and relationships keep me here. I have become friends with my customers, and I love seeing them. The kids come in and call me Mr. Eli or Mr. Barn!”

The Barn is truly the hidden gem of the community of Wyckoff.

“It’s a fun place to be," Eli says. “People come in and say 'hello' to guests at four different tables before they sit down.”

1929 The Barn established as a restaurant in Wyckoff

1934 The Barn receives the first liquor license issued in Wyckoff

2019 The Barn celebrates 90 years in business