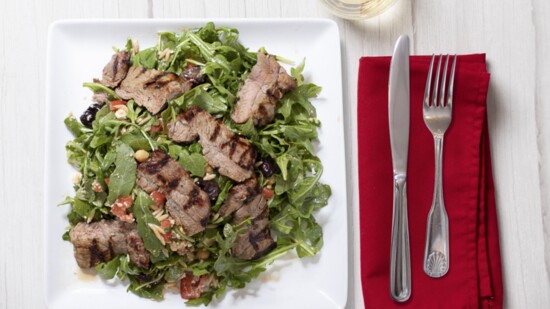 It's Greek to Me

Don't Myth Out on a Delicious Greek Experience!

Paul Vagianos is an example of a great American story. Paul’s father was an immigrant refugee who fled Turkey during the early part of the 20th century. Finding gainful employment in the restaurant industry, the young man started off washing dishes for a dollar a day and a free meal. Over his life, he owned several diners and supported his family thanks to his appreciation for excellent food and gracious service.

Although Paul pursued a career in law, he eventually came back to his foodie roots and opened It’s Greek to Me over 25 years ago in Ridgewood. The restaurant offers a casual dining experience with a delightful array of traditional and contemporary Greek dishes.

“My wife and I laugh when we reminisce about starting this restaurant,” says Paul. “I proposed that we sell the house, borrow what we needed, and open up a restaurant. This went against her grain, but she went along with it.” Paul searched several downtown areas in northern New Jersey before deciding on a location in Ridgewood.

“I got into this business because I love food,” he says. Having grown up in the food business, Paul knew this was what he wanted to do for the second half of his professional life. “We sell what we like as entrepreneurs.”

Good food is the number one priority at It’s Greek to Me, and its authentic, old-world recipes present Mediterranean food that’s fresh and simple with a healthy approach.

“All of this sprang from these old recipes,” says Paul. “If the food isn’t amazing, you have problems.” With today’s emphasis on the healthfulness of a Mediterranean diet, nearly any choice on the menu will be a smart one. Grilled calamari over sauteed spinach, horiatiki pizza, seafood dishes, and Greek salads pack a punch of delicious, fresh flavor and nutritional value.

“Our chicken special is one of the most popular dinner entrees,” says Paul. “We sell a lot of gyros and Greek salads—they are staples of the business. We also do a lot of fresh fish, and our stuffed peppers and tomatoes get the highest compliments from all the Greek grandmas, who say, ‘it’s almost as good as mine!’ That’s the highest praise you could hope for!” It’s Greek to Me has a unique liquor license that allows them to serve wines from California, but guests are also welcome to bring their own bottles.

Paul’s pride and investment in his staff are apparent. “The vast majority of my staff has been with me between 15 and 25 years,” says Paul. “Consistency is key in the restaurant business, and my staff really cares about what’s going on at the tables. They want the experiences of our guests to be great. We take so much pride in what we do."

Outdoor dining has always been critical to the success of their business. When he assumed the space 25 years ago, Paul pushed back the storefront to allow for an expanded open patio area, adding to the European flavor of the restaurant. In light of the pandemic, it was the right decision.  Paul attracted some attention by installing private greenhouses for diners during the pandemic. “I was ahead of the curve when COVID first hit us. I saw where it was going. I closed the dining room and went to a strictly delivery and takeout model in early March of 2020. Ten days later the governor called for the closing of all dining rooms. We learned a lot throughout the pandemic to make our businesses better.”

As a resident and business owner in Ridgewood, Paul enjoys being immersed in the community and has a heart for giving back and community involvement. “My kids grew up here. I’ve been involved in all kinds of fundraising for the schools, local organizations, and sports. Having a business in a community that you live in is a gift,” he says.

Paul is involved with the Ridgewood Chamber of Commerce and helps to run the weekend pedestrian plaza in the Village. He is especially proud of his work with the team of Feed the Frontlines, which delivered over 9,000 meals a week during the pandemic. “That organization saved several restaurants that would not have survived COVID,” says Paul. “There are over 100,000 food insecure people in Bergen County. A hot meal brings dignity to someone who does not usually have one. I’ve never worked with a team of people who are this effective.”

Paul’s way of giving back and running a business is reflective of his admiration of his father. “My dad was the hardest worker I’ve ever met in my life. I attribute 100% of my success to him. Whatever I’ve achieved is because I’ve been standing on his shoulders the entire time.”