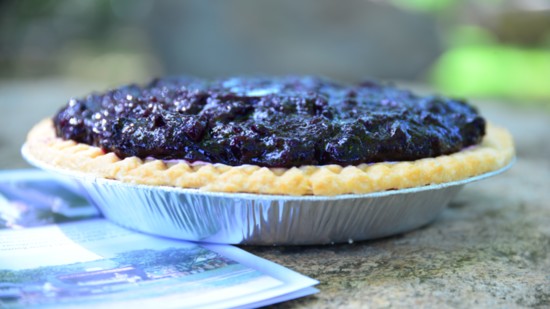 Head to the North Fork with Your Fork in Hand

You’ll be as hard-pressed as the cider of the season to find anything more American than this month’s banner holiday: Thanksgiving. Devoid of association to any particular faith, race or social status, this is the day all of us come together to celebrate the people and food that make the U.S. home. But a contender for the title of American as it comes? Pie.

Granted, the colloquialism nods to apple pie, specifically, but in keeping with the inclusivity of Thanksgiving, let’s make our interpretations broad; life’s more flavorful that way. And as the star dessert, there’s no mistaking the importance of having the right one at your table this fall.

However, what makes a pie the perfect one is subjective. Is it a custard-based flavor like pumpkin, a saccharine one like pecan or fruit that you prefer? The shape-holding beauty of a shortening-based crust, the crisp lightness of a leaf lard-based crust, the crumbly quality of an oil-based one or classic butter with its pockets of richness? Then there’s the classic argument of whether it’s a crumb, lattice or double crust that should grace the table.

The only way to find the perfect fit is to do the legwork. Because although the days of sipping wine in the summer sun are over, vino isn’t the only thing worth spending a day or two out east for. What we’re recommending is far better: a pie tour. So grab a fork!

Start in Wading River, where “Mama” Kathy Fink has been baking pies and making jams her very self since they bought back Fink’s Farms. Bring the little ones to this stop for the menagerie of farm animals from around the world, including enormous pigs and adorable Scottish Highland Cows.

If you’re able to tear yourselves away from the myriad family attractions at Fink’s, continue on to Schmitt Family Farm for apple classics that include double-crust, Dutch, caramel and a version made with Honeycrisp apples. But again, the temptation to veer off-course rears its head; summer sings her siren song with their lemon crunch, made with curd from their own line of preserves, and Peach Melba with house-made raspberry sauce and topped with slivered almonds. To get you back on track for fall classics, Reeves Farm is next on this North Fork route, where fresh local pumpkin; Gala; and manager Amy Perkowski’s favorite, Arkansas Black Apples; and sweet potato (if you’re lucky) can be found.

Now that you’re warmed up, like a sweet (or savory!) song, the tour comes to a crescendo at what is perhaps the most famous pie purveyor on the East End: Briermere Farms. Made proudly on-site with fruit grown on those same grounds, these pies are as solid as their reputations.

Light, buttery crusts and dense, fruit-forward fillings are their trademarks, and the fresh-apple renditions they offer year-round—thanks to cold storage facilities—take the lead in popularity against their deservedly famous cream pies once the temperature and leaves begin to drop. However, few can resist that slight tang and mousseline cheesecake texture of their sumptuous fruit-topped cream pies, so our pro tip is to get one of each—and at least two of their outstanding soft-baked signature cookies, packed with nuts, coconut flakes, chocolate chunks and joy.

Next up is Woodside Orchards, arguably the East End’s apple experts, growing up to 28 varieties. However, there’s no better time to enjoy their crop than in the fall, according to Gayle Gammon of this popular cider stop.

“Fall varieties are just better for baking! The Portland and Ida Reds hold up best,” she says, especially nestled cozily in a rolled-from-scratch crust under a blanket of the same or a Dutch crumb made slightly heartier with oats.

Swinging from niche specialist back to variety being the (pumpkin) spice of life, the beautifully expanded Bayview Farms & Market is unmissable. What started out as a simple stand for a seven-generation property has become a specialty trader of all things delightfully edible and charmingly local, down to the produce used in their vegan-friendly oil-crust pies.

“We use Long Island Cheese Pumpkins that we grow and puree right here,” shares manager Kathy Reeve. “We also grow our pie peaches here, and our apples, which go into our popular apple caramel with walnut version.”

Hallock Cider Mill is next on our route, but don’t be misled by the name. Like Bay View, what began as a “stand” in 1978 has grown into a stalwart tree with branches that extend far beyond its roots. House-made apple, pumpkin and sweet potato butters, jams, cookies and so much more line the shelves and are worth taking a gander at—if you can make it past their bakery case, the anchor of the store.

The first thing you’ll notice is that unlike many other piemakers on the East End, their crumb is made of generously thick, chunky streusel as opposed to the fine, almost sandy graham cracker-like texture popular with most other farmstands.

“It’s all made from scratch from family recipes,” Wayne Hallock Jr. says when asked about this delectable deviation.

You’ll find this crumb on the apple pies, in both conventional sized pans and half-size rounds, a popular option for those who find themselves indecisive when faced with the selection.

“People like to mix and match so they can try a little bit of everything,” he says.

What this means is no choosing between the family orchard apple, farm-harvested pumpkin, coconut custard and the black cherry, a dark horse fall favorite. But few pies are as beloved as their real, whole Key lime, or as notorious as their Sinful Pie, a cold dessert made with nougat, toasted coconut, pecans and caramel.

If that sounds too sweet, Wickham’s Fruit Farm is the perfect next stop with their fruit-forward pies in a thin, lighter crust. It’s a top favorite of food writer and East End expert Hannah Selinger’s for several reasons, not least of which is that “they have an incredible orchard, and apart from Briermere, are one of the last real, full-fruit growers on the North Fork. They’re the only ones on the entire East End, actually, who are growing and selling sour cherries, and on some of the oldest continually cultivated land in the country as a historic bicentennial farm.

The penultimate stop on the tour is, in contrast to Wickham’s history, a relative newcomer. Breeze Hill Farm & Preserve is where Gabi Spielmann, who made a name for herself selling Gabi’s Organics in the Hamptons, is now the resident maker. She’s traded in baking cookies for baking pies, in addition to making from-scratch caramel, jam, tortes and breads for the stand. This season marks the debut of their Mason jar cobblers, which feature any of the 20 varieties of apples they grow on the grounds, as well as the apple, walnut and caramel drizzle pie that event coordinator Rosemary Pia laughs, “is the one most stolen by employees!”

Another headline debut for this year is the fully organic pumpkin pie, made with their farm pumpkins and fully organic ingredients, circling back to Gabi’s roots.

“I like doing things the old-fashioned way, like milling apple butter ... but old-fashioned also means going organic as much as possible,” she says. “It brings us closer to our food.”

… Which brings us to our farthest and final stop, Country View Farm Stand where fourth-generation farmer Kevin Polak staked his own claim in our bucolic landscape when he bought the property in 2011. Pies there are a product of partnership, baked daily with local fruit and offering sugar-free options for those who require it … or just want to cut a few calories in favor of another slice. Because no matter how you slice it, life is short. You deserve a piece (or four) of the pie … so head out east and get yours.