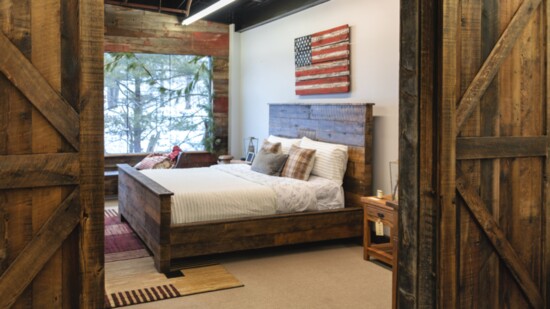 Discover the epitome of American craftsmanship—repurposed for enjoyment in your own home. The furniture, planks, and flooring at American Reclaimed are literally a slice of history; born from hand-hewn planks, beams, and siding crafted for barns built some 200-300 years ago.

Sal Mastropolo III and his team recycle—or rather--reinvent these materials, transforming them into stunning design elements for home renovation, furniture, and accent pieces.

“My dad started the business in 1979 cutting and selling firewood in Manhattan,” says Sal. Interestingly enough, one of the senior Mastropolo’s best customers was a Manhattan resident named Robert DeNiro. The firewood business was good, but when Sal Sr. was hired to take down an old barn for the sum of $800 in 1979, he got the idea to approach barn owners throughout New York, New Jersey, and Pennsylvania to dismantle old barns in exchange for the lumber. He advertised his service by placing flyers on cars where he delivered firewood. As luck would have it, one of the cars was owned by an employee of Polo by Ralph Lauren, resulting in the purchase of large amounts of barn planking for store interiors. Other notable corporate clients included Bergdorf Goodman, Toys R Us, and many area bars and restaurants.

“One flyer set it all off,” says son Sal.  A second business was later founded which specialized in natural materials for prop houses. The family business supplied items like acorns, bird nests, trees, stumps, and bullrushes needed to set the stage for movies or Broadway performances. Their materials even co-starred with Michael Jackson in his 1995 music video “Earth Song.”

The family opened a new facility in Goshen seven years ago called Authentic Antique Lumber, supplying raw materials, live edge slabs, and barn siding. Sal joined the business soon after and took it over from his dad. A lumberyard and a wood kiln are located on-site, as well as a workshop where craftsmen build and customize the finished products.

Fast-forward to 2020, American Reclaimed opened on Rt. 17 North in Upper Saddle River. “We were running out of space in our woodshop, so we decided to open a fully-finished, custom furniture company here in Bergen County,” says Sal. “We can now supply, build, and install everything from custom tables, mantels, flooring, and building materials.”

The store specializes in a variety of wood specimens from all over the Americas. In addition to traditional barn woods, they also stock exotic species; many of which are cut from fallen trees particularly appealing to those with environmental concerns. There is an entire wall of wood samples for customers who want to compare color and grain to determine their preference.

“People are looking for recycled and repurposed woods. They have more character,” says Sal. Although one may think that the repurposed barn wood would only suit those with rustic tastes, Sal and his crew love to innovate the visual contrasts which suit their contemporary customers. This is achieved by adding steel bases to the reclaimed wood elements for an interesting and appealing vibe that’s perfect for more modern tastes.

With the passing of his beloved dad several months ago, Sal is now sole proprietor. “I’m carrying the torch for the family business,” he says. “We offer rustic décor from ceiling to floor!”