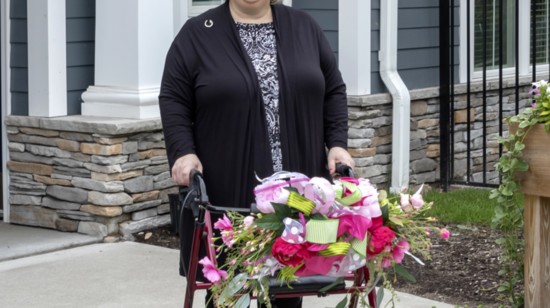 Giving Back … Pay it Forward.

There are various “directions” one can take when inspired to get involved in community service, whether it is through an organization or just by helping a neighbor through a challenging time.

During this month of Thanksgiving, Northwest Bergen Lifestyle chose to introduce two individuals in our community who embody the spirit of giving and caring for others in a variety of ways.

“Giving Back” and “Paying it Forward” not only pertains to buying the person behind you a cup of coffee, paying a toll or donating to a charity. To Linda Webster Cennerazzo and Lee Parker, it means sharing the selflessness, generosity and sense of responsibility they learned from the people who inspired them: their parents.

Read on and consider the legacy of giving back you are sharing with your own families. Happy Thanksgiving!

Growing up in Mahwah, Linda Webster Cennerazzo remembers helping her mom carry and deliver items for donation to those in need.

“My mother was a true giver,” Linda says. “She was tireless in making a difference in the lives of others.”

Giving back was also a large part of her high school‘s culture at Immaculate Heart Academy.

“I learned about the spirit of volunteerism and fundraising during those years.”

Having been diagnosed with multiple sclerosis in 2003, Linda is a staunch advocate for people with disabilities and champions for their accessibility and functional needs. She is a supporter of the Bergen County United Way, Madeline Special Needs Housing, Adler Aphasia Center, Multiple Sclerosis Society, Holy Name MS Center, Valley Hospital, Hackensack University Medical Center and many other organizations. She is also an appointed member of the Bergen County Division on Disability Services Advisory Board.

After her mom passed away in 2011, Linda and her family decided to donate 1.2 acres of land for a plan in collaboration with the Township of Mahwah, Bergen County United Way and Madeline Corporation to build Mahwah Commons in her memory. The special needs portion of the housing has been recently completed, and affordable senior housing is slated to be completed next summer.

“Who would ever think our gift would give back to us? It’s the gift that keeps on giving,” Linda says. “It puts a smile on your face to help someone else.”

As the president of the Wyckoff Y’s Board of Directors and an active Rotarian, Lee Parker has a strong connection with the community in which he has lived for the past 25 years. With his ongoing involvement in other initiatives such as the Bergen Buddy Walk, Wyckoff Day and several charity golf outings, some people wonder how he does it all—in addition to running a business.

As one of five boys growing up in Paramus, Lee’s parents and grandparents considered “giving” a part of everyday life. His family was active in church outreach and special causes; his grandmother, widowed at a young age, took in dozens of foster children throughout her lifetime.

“Sometimes someone just needs a boost, some counsel, a break, a job or some food,” he says. “When I hear about someone in town going through cancer treatments, I give them some dinners. I try to connect them with the help they need.”

Lee says his true reward is in the example he hopes to set for his own family.

“If I can pass down just 10% of that giving DNA along with what I was privileged to experience growing up to my own kids. … I will consider that a huge success and a continuation of our legacy!”