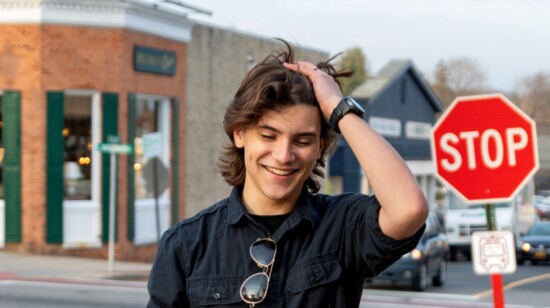 Photography by Jean Terman and Contributed by Jake Thistle

“They’ll tell you how to live, but they don’t have a clue, say that they know better than you,
Say that life’s so short when it’s the longest thing we ever do” – The Lines on the Road/Jake Thistle

Jake Thistle is a classic rocker wrapped up in a 16-year-old body. As a musician/singer/songwriter from Paramus, the guitarist has an impressive self-taught musical affinity. Referred to as “the real deal” and “a spectacular talent” by renowned music industry professionals, Jake’s retrospective spirit serves him well.

And it all started with the Super Bowl halftime show in 2008.

“I was three years old when Tom Petty and the Heartbreakers performed in the halftime show. My parents let me stay up to watch--thinking I may be interested in football--but the music is what drew me in. My parents allowed me to Google other bands and similar genres, and I fell in love with classic rock,” says Jake.

When he was 9, a family friend presented Jake with a guitar and taught him a few chords.  He learned the rest on YouTube. “It snowballed from there, and now I have 20 guitars in my collection!” says Jake.

It’s fair to say that Jake is self-taught, but he also had a few good mentors. “I started playing some open mic stuff around my 10th birthday. When I was about 11, I played at a bar with Dave Gellis of Blood, Sweat, and Tears. We hit it off, so before he went back on tour, he gave me my only in-person guitar lessons. That was the only live instruction I ever had on any instrument,” he says. “I learned the keyboard by applying what I knew from the guitar.”

As a junior at Paramus High School, he plays in the jazz band and takes a music theory class. “I'm self-taught, but I've been fortunate to play with a lot of excellent musicians. I make sure that I pay close attention to what they're doing when we're on stage together. I have a lot of great teachers--whether they know it or not,” he laughs.

Jake had sent a performance video to John Hiatt before attending his show, and Hiatt invited him to accompany him during the encore. “It was such a fun night,” says Jake.

Having raised over $100,000 for various charitable organizations, Jake’s involvement in a charity called Rock the Dogs led him to connect with Mike Campbell, Heartbreakers guitarist. “In 2016, Tom Petty sent me front row tickets to his show for Christmas,” says Jake. “I got to meet the band members, but Tom was not feeling well that night.” Despite Tom's untimely loss in 2017, Jake has remained in touch with the band members and Tom’s brother, Bruce. “It’s so nice to learn from people with experience,” he says.

The soulful artist has also played on Friday evenings outside Kilwins. When he noticed that Bruce Springsteen songs were a popular request, he taught himself “No Surrender” and posted a few recordings on Bruce’s fan pages. As a result, Jake was offered a gig in England for a Bruce Springsteen weekend. “I had to learn a lot of songs in two months to play four hours of music,” he says. “I’m grateful for that because now I’m a big fan. I do a lot of work in Asbury Park covering Bruce as well,” he says.

The six-string guitarist recently released an album called “Down the Line,” performing every instrument track and then layering them on his soundboard. “My album is the direct result of trying to make the best of the pandemic,” he says. “My full studio EP was put on hold due to COVID, but the world needs music now more than ever, so I had to find a way to bring an album to life this year. The album has a type of Americana vibe that I hope people will enjoy.” Jake will donate a portion of each sale to Rock The Dogs/Tazzy Animal Rescue Fund.

Although he hopes to work professionally in the music industry, Jake has a backup plan of becoming a history teacher. He skillfully weaves his two loves together in his lyrics for “Frontier of Time.”

“I watch the world move from what they declare obsolete; then I watch them do it again. Anything we’re not bound to learn, we’re bound to repeat. So, we’ve been going forward without moving ahead.”