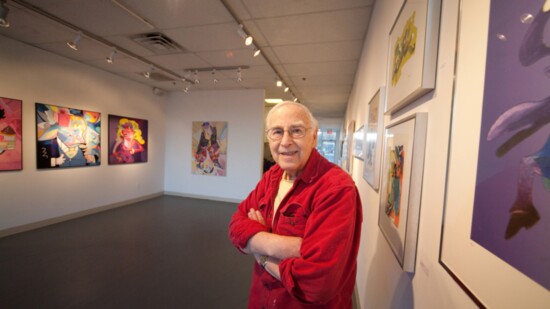 Photography by Contributed by Ivan Boden

Arthur Boden was born in Newark in 1927, the son of Russian immigrants who grasped the American dream after living a difficult life in Russia.

Growing up, Arthur became an accomplished bass player and musician. He enlisted in the navy toward the end of World War II, and post-war attended the Newark School of Fine and Industrial Arts, where he studied painting and illustration. "He was true to his creative side," relays his son, Ivan, "and his passion for art overtook his love of music." He continued his studies at the Art Students League, the New School with Alexi Brodovich, and the Pratt Institute with Aaron Burns.

His education led him to a graphic arts career, working in design studios and advertising firms as a layout artist, illustrator, graphic designer, and eventually as an art director—all in the days of t-squares, ruling pens, and photostats. "My father never learned how to use a computer," says Ivan.

When he heard that IBM was looking for designers for their new art department, Arthur decided to apply. IBM was ahead of its time in understanding the need for an official brand development policy. As the company's leadership was riding the trajectory of the computer age, IBM's then CEO, Tom Watson Sr., believed that "good design is good business" and had much more than technology on his agenda.

He hired graphic and industrial designers who were at the top of their fields. IBM’s employees were instructed to dress conservatively and professionally and were enrolled in Dale Carnegie classes. No expense was spared in any department--especially the art department. Watson wanted to project a progressive image for IBM by investing in a dedicated design department. He was the force behind the creation of IBM's Corporate Design Program, the first of its kind in America, to create an environment of harmony between business and design.

Watson hired an outside graphic designer named Paul Rand, a consultant who oversaw IBM's design program and was credited with developing that iconic 8-bar IBM logo. Rand's job was to find talented artists and designers who could bring the corporation's professional look and culture to a new level.

"My dad worked on anything carrying the IBM logo," says Ivan. Arthur worked closely with Paul Rand to develop the company's IBM brand design guidelines in the late 1950s. Although branding guidelines are commonplace for corporations now, this was groundbreaking at the time. The art department ensured that all of the imagery, messaging, and colors were branded appropriately and that guidelines were created for international consistency across the entire company's expanse.

Eventually transitioning to a freelance designer, Arthur continued to work for IBM, creating the graphics for their presence at the 1964 World's Fair. He also produced creative work for major pharmaceutical, automobile, and accounting corporations.

Inspired by a paper mache giraffe that Ivan made, Arthur wrote and illustrated a children's book called "Boden's Beasts," which was picked up for segments by several magazines and NBC's Gene Shalit.

The 1970s brought contemporary art into the picture. Arthur loved to use brilliant colors and show how they can be combined with various shapes in exciting ways on a large canvas. The elements' arrangement implies the perception of colors moving forward toward the observer or slipping into the background. At his first gallery opening, Arthur sold every painting, some for as much as $70,000.

"Style changed over the years. He was always sketching and drawing figures," says Ivan. "He always made a card for my mother's birthday. He was true to being an original."

Inspired by Pablo Picasso, Jean Dubuffet, and Paul Klee, Arthur encouraged creative thinking. "I had a coloring book that I loved," says Ivan. "But my dad took it from me and encouraged me to create and color my own original images. He forced me to think and not be lazy. I hated it then, but now I realize the value of expressing things in your own way."

Arthur passed away in 2019 at age 92. "He lived and breathed art and design 24/7," says Ivan. "Artists are always second-guessing, but my dad was true to his creative side. He never gave up on anything he set his mind on doing."

Artwork by Arthur Boden is available at Olive 54 in Ramsey.