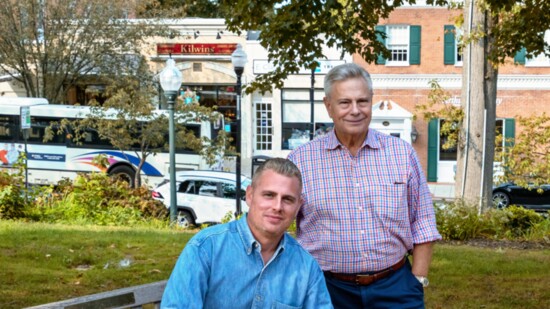 Seigel Law's Power of One Percent

Jan and Jonas Seigel Make a Practice of Giving Back

At the Seigel Law firm, giving back is a numbers game. One percent to be exact.

When son, Jonas, joined the practice, he established the Seigel Law Charity Fund, which donates a portion of every fee to charity. The faces of these two gentlemen light up when they speak about giving back.

“Service to the community is part of the firm’s DNA,” says Jonas. “We learned at an early age to give back. My father engrained it in me. When people enter your life and do something wonderful for you, sometimes you can’t pay it back…so, you have to pay it forward. We wanted to make this a part of the firm’s culture.”

The adage “to whom much is given, much is expected” is the foundation of their philanthropy. “The legal industry doesn’t define us. What makes me shine is the opportunity to take time out of the day to pick up a hammer, read to kids, and give back to an organization or school,” says Jonas.

Over the years, Seigel Law has made donations to a variety of organizations including Eva’s Village, the Valerie Fund, Special Olympics, and Habitat for Humanity. However, for Jan and Jonas, writing the check isn’t enough. They make a point of rolling up their sleeves and getting involved hands-on.

While in college, Jonas spent four months following Hurricane Katrina in Louisiana. Living in a tent while helping to rebuild homes for Habitat for Humanity caused a slight delay in his graduation from law school. “They needed hammers more than the world needed lawyers,” quips Jonas.

Seigel Law is the first law firm in New Jersey to commit to Pledge 1% (www.pledge1percent.org). “We found out about this organization where businesses commit to pledging 1% of equity, time, product, or profit. We were doing that anyway, so we were on board right away!” The Seigels are proud to be a part of this impactful national philanthropic organization spearheaded by international business leaders.

The Seigels see philanthropy as an opportunity to reach people beyond the scope of the law practice. “We have our favorite charities which we give to each year, but also support other agencies when we learn of a need arising, says Jonas. “We keep old friends and try to make some new friends each year,” adds Jan.

“Giving back is therapeutic. We were blessed to be introduced to a track club in Englewood which had 40 kids who qualified for the Junior Olympics—but they couldn’t afford to go. We were able to donate so that they could participate,” says Jonas.

The Valerie Fund is an ongoing favorite charity of the firm which supports children with cancer and blood disorders offering comprehensive healthcare services. “As a parent, I can’t imagine juggling bills and worrying about cancer treatments for your children,” says Jonas.

The firm donated a bus to the Boys and Girls Club in Lodi because they had a need to pick up kids from the Hackensack Club. Then, the Paterson/Passaic Boys and Girls Club approached them for help in engaging young teens to keep them off the streets and away from gangs, so the practice assisted with donating funds to build a computer lab.

“Paterson is right down the street and it’s another world. So naturally, giving back to Paterson--helping the schools, providing meals, even reading Dr. Seuss books to PS #12 is important to us,” says Jonas. “We enjoy interacting with the kids and hope to convey the message that they can achieve anything they set their minds to.”

Refereeing a special needs basketball game for the Special Olympics is especially rewarding. “Seeing the smiles on their faces as they receive their medals, and how happy the kids and parents are…you can’t put a value on those moments,” says Jan.

“Everything is tight these days and the charities are having a hard time with their fundraising,” says Jan. We hope to inspire others to join us and so that giving back will grow exponentially. I know it’s a tough time right now but it’s even tougher for those in need,” says Jonas.

“There’s so much work to do, and there are so many people that we look forward to helping,” says Jonas.

“We get more out of it than they do,” adds Jan.

Their one percent is making a difference.