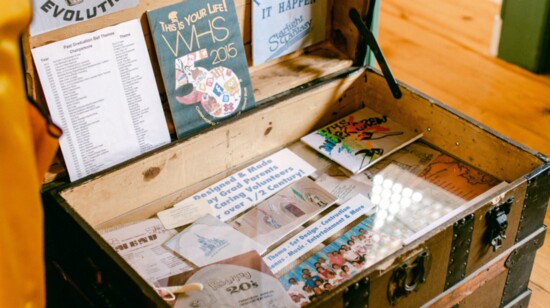 Northwest Bergen Lifestyle is on track with a railroad theme this summer! Last month, we introduced you to the Waldwick Whistle Stop, and this month, we took a short walk down Hewson Avenue to the Waldwick Railroad Museum, housed in a restored railroad station.

Planned and built in 1887, the station’s Queen Anne style is typical of railroad depots constructed throughout the country toward the end of the 19th century. The station was in existence before the Borough of Waldwick was incorporated in 1919. Listed on the National and New Jersey Registries of Historic Places, the Railroad station has come into its own as a beautiful reflection of the history of the growth of farming and manufacturing in Bergen County.

At its peak around the turn of the century, approximately 50% of Waldwick households had at least one family member working for the railroad, which was crucial in transporting freight and produce to markets in Paterson and Newark. It was the location where countless parades passed, people met, and business was transacted. The building even served as the borough’s post office and telegraph office at a time. A nearby renovated railroad signal tower is located approximately 1,000 feet north. Together, these structures are important representations of the railroad and how it affected the suburban growth of the area.

Volunteer Rich Mennella first learned of the station when he was invited to a fundraiser to restore the project. “I never envisioned what we are looking at today,” says Rich. It was falling apart.” Before the restoration in 2011, the structure had fallen into disrepair over the years. The foundations and sill plate were continuously exposed to groundwater which caused the building to sink. The untreated façade and framework were exposed to the elements, and this caused significant damage. Although the roof had gaping holes, many interior original features were still intact and in surprisingly good condition. By 1977, the station was shuttered, locked, and all but forgotten. By 2005, it appeared the station would rot into the ground.

However, this “little station that could” had something going for it…listings in the national and state registries of historic places. New Jersey Transit could not demolish it because of that. After continuous pressuring of NJT, the Waldwick Community Alliance (WCA) was able to take over control of the station and revitalize it. This labor of love took almost five years and cost $600,000.

“This building is restored, not renovated,” says Rich. Tongue and groove wainscoting was painstakingly taken down piece by piece, numbered, restored, and put back. Only slats that were damaged beyond repair were replaced. The restoration team was amazed to see the colorful stained-glass panes hiding beneath layers of black paint. Original window sash lifts featured elaborate Victorian-era design and decorative woodwork framed six-over double-hung windows with divided light sashes. The station also houses original cast-iron pot-bellied stoves, which kept travelers warm in the winter.

Now, this hidden gem is ready and waiting for a whole new manifest of visitors. Cases displaying local history are curated to focus on Waldwick’s military heroes and original artifacts from railroad history. Over the past few years, the museum’s exhibits have rotated to include aviation history, the Borough’s Centennial celebration, the history of immigration, and the role the textile industry played in the growth of Waldwick and surrounding towns.

Before the pandemic, the museum was open for visitors every other Sunday, and Rich hopes to get back on track with that schedule soon. “I get calls to open up the station for people who are interested, and you hear amazing stories from the older folks,” he says. “For example, I learned that in the 1930s, Waldwick teens went to high school in Ramsey. They got there by train.”

Rich is happy to open up the museum for guests and groups upon arrangement, especially since they have not yet resumed their pre-covid opening schedule. Keep checking the website, but in the meantime, Rich says, “Bring the family, give me a call!”