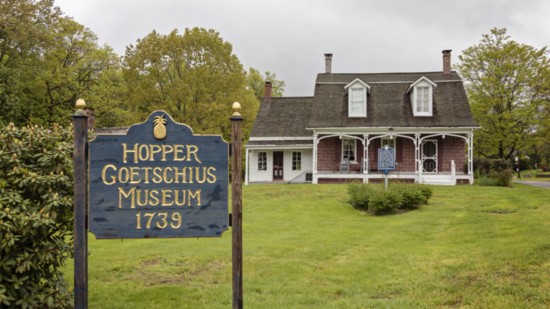 Northwest Bergen County is rich in history, from George Washington’s visit to The Hermitage in Ho-Ho-Kus in 1778 to homes among us built in the early 18th and 19th centuries that still stand today. Take a drive through many of our towns, and you’ll see historical landmarks sprinkled throughout, teaching us about our area’s important place in the history of our state and our country. Here are a few places to start, each chock-full of their own stories.

The Bishop House was built in 1835 by one of Bergen County’s oldest families, the Ackermans. An addition was added in 1870 by James Dewsnap and renovated by the Bishops following World War ll. The Bishop House was purchased by the Borough of Saddle River in 1980 and added to the National Register of Historic Places in 1986. The Borough is currently collaborating with Ho-Ho-Kus-based Morpurgo Architects to restore the original intent of the house as Saddle River’s Community and Cultural Center. The significant historical building will be used for social functions, cultural events and as home to many clubs and organizations. SaddleRiver.org

The Schoolhouse Museum, built in 1872, operated as a public school until 1905 as part of the district school system formed in 1864. Built at a cost of $4,600, it was for girls and boys in first through eighth grade. The windows, a potbelly stove and two central lamps are original to the building. A large bell, which was once used to call children to school each day, was used in other schools after 1905 and returned to its original home in 1977. The Schoolhouse is on the National Register of Historic Places, along with the bordering Old Paramus Church and is maintained by the Ridgewood Historical Society where exhibits are on display. RidgewoodHistoricalSociety.org

The oldest remaining house in Upper Saddle River, the Hopper-Goetschius house was believed to be built in 1739. The Hoppers farmed their land, which extended from the Saddle River at Lions Park almost to Montvale and up the East Road. The Rev. Stephen Goetschius of the Old Stone Church purchased the home, and it remained in the family for a century and a half. The Reverend’s grandson, also Stephen, served as the borough clerk for more than 40 years. In 1985, the home was given to the Borough of Upper Saddle River by the family and serves today as a museum run by the Upper Saddle River Historical Society, offering events to the public throughout the year. USRHistoricalSociety.org