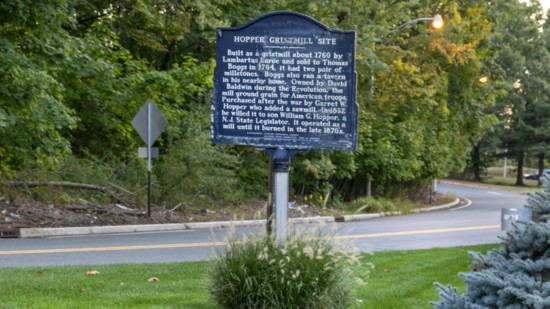 Driving through time. We do it all the time without an awareness of the history around us. In a high-tech world of Bluetooth- and Wi-Fi-equipped vehicles, we often drive roadways that take us back generations to a simpler time. Every town in Bergen County has a thoroughfare, a major road that passes through the center of town and usually connects one town to another. These thoroughfares are often paved representations of hunting trails or warpaths used by Native Americans centuries ago. Often, they are rimmed with a photo album of visual reminders of a town’s past. For Mahwah, Ramapo Valley Road (Route 202) is a thoroughfare extraordinaire.

The township of Mahwah, or Mawewi, the name bestowed on the town by the Lenni Lenape, is a unique community that combines the rustic charm of native wilderness with the active life of a modern suburb. Yet a casual drive down Ramapo Valley Road will transport one through centuries of time. So let us begin with the Continental Soldiers Memorial Highway Markers that identify Ramapo Valley Road as the route of the strategic Washington-Rochambeau march to Yorktown in 1781. Under Gen. Rochambeau, French troops traveled south from Suffern, New York, through New Jersey en route to Yorktown, Virginia, the site of the most decisive and clinching battle of the Revolutionary War.

If one starts this Ramapo Valley Road journey by traveling north of Bear Swamp Road, one will find the Winter Farmhouse, one of the last representations of Mahwah’s agricultural past. The Winter family built this home in 1844 and established their prominence as farm and dairy entrepreneurs as well as community leaders. Unfortunately, despite proactive attempts by the Mahwah Historic Preservation Commission to preserve this house, its state of disrepair has put its future in question.

North of the Winter Farmhouse, perpendicular to Campgaw Road is the stunning Darlington Schoolhouse, built in 1891. This architecturally unique schoolhouse was financed by Theodore Havemeyer, an innovative partner in the Havemeyer and Elder Sugar Refining Company; and Alfred B. Darling, the owner of the Fifth Avenue Hotel in New York and the Valley Stock Farm in the Ramapo Valley. This fieldstone structure was originally designed as a school for the children of local farm workers. The first-floor schoolroom was designed to facilitate grades 1 through 8, while the second floor was designated as a meeting place for public events. Beautifully and authentically restored by the New York-New Jersey Trail Conference, it is the new location of the organization’s headquarters.

Speaking of the Havemeyers, located a few tenths of a mile north of the schoolhouse is the stately Havemeyer House. This home was built in 1849 by Henry Hagerman, a New York militia colonel and a local political leader, for his son Andrew and his wife. This spacious brick mansion became the residence of Theodore Havemeyer in 1878 and remained in the family until 1993. Enhanced by several renovations, the mansion currently serves as the home of the president of Ramapo College.

The ease with which one can drive in and out of centuries on Ramapo Valley Road only ends where the thoroughfare itself ends, at the border of Suffern, New York. Along this route, there are many other historic landmarks including the Laroe-Van Horn House, which sits near the location of an early Indian trading post established by the adventurous widow Blandina Bayard. Continue your drive north to pass the Mahrapo Farms, originally part of Theodore Havemeyer’s Mountain Side Farm and currently home to rescue and boarding horses. Should you round the curve at the end of the line, you will find the American Brake Shoe Factory. Established as the Ramapo Foundry in 1901, it produced brake shoes for trains, serving a national market. The American Brake Shoe and Foundry eventually transitioned into the production of hydraulics and automotive products; during WWII the company filled defense contracts for shell casings, explosive compounds for munitions and even contributed to the research for the Manhattan Project.

No matter what time period you fancy, a Ramapo Valley Road drive through time will not disappoint!