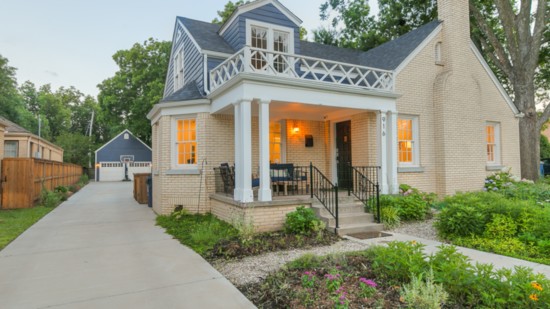 Sarah and Andi Bytyqi had worked together in real estate and renovation in the past when they came across a home in 2015 that most investors would consider unsavable. Many would even argue their case for permission to demolish the house and start over, rather than put in the effort to renovate it.

It was through the encouragement of Katie Friddle at the City of Oklahoma City Historic Preservation Department that they decided to take a look at the prospect of taking on the project.

With the help of the Historic Preservation, the Bytyqis convinced the City of Oklahoma City to remove the home from the dilapidated buildings list to prevent its demolition.

Built in 1935 in the historic Crown Heights neighborhood, the home was originally only intended to be an investment project but quickly turned into a labor of love. "No expense was spared," Andi says of the efforts to bring the home back to its original beauty.

To be fair, the house was in terrible shape. A large, old pecan tree had fallen on the roof, where it remained for seven years. A substantial leak resulted that caused extensive damage to the structure of the home. In addition, the home was full of debris in every room. Eventually, the city required the occupants to take some sort of corrective action. A temporary patch job preceded them simply moving out.

A large amount of debris was left throughout the house from the previous hoarding situation and 60%-75% of the lumber in the home needed to be replaced.

The then four-bedroom, two-bathroom home needed some serious TLC even to be habitable again.

One consideration of this project is that as it is a home in a protected neighborhood, the Historic Preservation Department must approve all changes to the exterior. These regulations often come with hefty restrictions that can prove quite costly. They decided to spend the $75,000 to acquire the property and make it happen.

After stripping away most of the inside, Andi and Sarah began planning out a dream family home. The floorplan changed to create a third bedroom on the second floor, leaving only the now-expanded master suite on the first floor where the kitchen used to be.

The newly expanded kitchen replaced what was once two bedrooms and opens up to a dining area near the open entryway and living room. A 12-foot kitchen island became a perfect place for entertaining in the kitchen.

Many modern upgrades were included in the interior remodel, including a tankless water heater, a highly efficient four-zone HVAC system with an automatic damper system, LED lighting, a state-of-the-art security system, updated plumbing, an energy-efficient furnace and spray-foam envelopment insulation.

The 80-year old windows were in great disrepair, but instead of replacing them, they had them hand restored, a project that took nearly six months.

"They will probably last another 80 years now, longer than metal or plastic windows," Andi says. They also restored the original front and back doors.

Along with the structural wood, the replacement of the cabinets and floors was essential. Solid maple cabinetry and five-inch hickory hardwood floors tie together the updates.

The master suite was expanded to feature a luxurious bath and shower and much more open space than you typically find in a home this age.

Outside the home, The Historic Preservation Department permitted them to add a 1 1/2-story, two-car garage toward the back of the 60-foot-by-87-foot lot, complete with a long driveway.

Randy Marks, a permaculture specialist who is now with the Oklahoma City Parks Department designed the landscaping. They maintained the mature trees while adding in a native Oklahoma wildflower garden and new cedar fencing.

They moved the electric lines underground and utilities out of the way for the possible future addition of a swimming pool.

One of the reasons that the Bytyqis decided to take on this project was their commitment to preservation. They successfully proved that it is not impossible to reconstruct severely damaged homes but instead put effort into saving them.

Crown Heights does indeed have a long history in Oklahoma City. The first homes were constructed in 1931. Within 10 years, nearly all of the neighborhood were complete.

Also completed is the Bytyqis' remodel of this Crown Heights jewel. While it is now home to another family, it remains one of their most significant remodeling accomplishments.

"It is so personally rewarding to save an old house that is so badly damaged. To know that you leave a lasting impact on both a home and a neighborhood gives me so much satisfaction. We took the worst house in the neighborhood and transformed it into one of the best. I love that our efforts will live on for years to come."