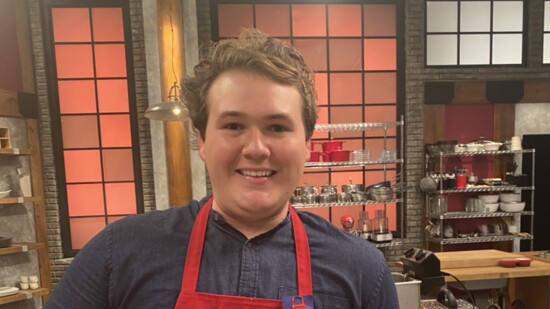 An Interview with One of the Worst Cooks in America

On the very first episode of season 21 of Worst Cooks in America, Cameron Bartlett of Norman proudly served master chef Carla Hall his favorite signature dessert. Known as “Cameron’s Famous Fudge,” his concoction included butter, marshmallows, white chocolate and gum drops, and he explained that he would give it to his friends every year at Christmas.

One bite later, Chef Carla offered the following advice: “Don’t do that to anyone anymore. Ever.”

The fact that Cameron ended up on the Worst Cooks in America did not come as a shock to his parents, Chad and Helen Bartlett, lead pastors of Norman’s GoChurch.tv.

“It’s like he was born without taste buds,” Chad says, laughing. “He is just truly terrible in the kitchen.”

Cameron doesn’t dispute the fact that his culinary skills might leave something to be desired.

“I have a horrible track record in the kitchen,” Cameron admits. “My friends have endured my cooking for years. Some of them have ended up in the hospital. True story!”

Chad and his wife, Helen—longtime fans of the show—saw a call for nominations for future contestants.

“It seemed like the perfect opportunity,” Chad explains. “Not only can he definitely not cook, but he is truly entertaining. He’s just such a funny person.”

A popular show on the Food Network, Worst Cooks in America recruits novice cooks with poor cooking skills from around the nation. The competitors go through a culinary boot camp, receive on-site training on cooking techniques, and ultimately cook a restaurant-quality, three-course meal for the show’s master chefs in hopes of winning a $25,000 cash prize.

Nominating Cameron seemed completely natural, given his track record in the kitchen.

“Once when he was making sugar cookies, he misread the recipe. Instead of one and one-half cups of sugar, he put in 11 cups instead,” Chad recalls with a laugh. “Another time when he was making cookie bars, he added equal parts baking soda and sugar. They literally foamed in your mouth.”

To the family’s surprise, Helen received an email from the Food Network shortly after submitting their nomination. Cameron then filmed a cooking demonstration to submit as his official audition for the show. He prepared the Barefoot Contessa’s Chicken Pot Pie recipe with “a twist”. The twist ended up being undercooked chicken and unintentional scrambled eggs in the middle, courtesy of his heavy-handed egg wash on the crust.

The video proved enough for the show’s producers, who contacted Cameron in August 2020 to offer him a spot on the show. He flew to New York in early September for a mandatory two-week COVID-19 quarantine and then an anticipated four-six weeks of filming.

“Being on the show in the middle of a pandemic turned out to be a really special opportunity,” Cameron reflects. “Most of the time, contestants fly in the day before and are on set at 8 a.m. the next day. But with my group, we had two weeks to get ready and get to know each other before the filming even started.”

Cameron became the unofficial social host of the group, decorating his hotel room with artwork and pictures, adding a cappuccino maker and inviting the other competitors to hang out.

“We were so close that it made it hard to be competitive. The camaraderie and chemistry were great, ” Cameron says. “We still text and talk all the time. We are all meeting up this coming October for Amber’s (the winning contestant) wedding, almost a year later.”

The experience on set was unlike anything Cameron anticipated.

“We filmed for 10, 12 sometimes 14 hours a day,” he explains. “It was so stressful. I was having to concentrate on cooking well, remembering everything I had been taught, and trying to win challenges to be able to progress in the competition. I don't think I’ve ever been so tired!”

Cameron says that what viewers see on the show is truly reflective of the experience that the contestants have.

“We really do have the time limits, and all the ingredients and cooking were real,” he says. “Plus, cameras were up in your face and it was hot in the kitchen with all the burners, ovens and lights. People would drop things, spill things and it was easy to slip. The kitchen was actually very hazardous!”

“Cameron just being in a kitchen is hazardous,” Chad adds with a laugh.

Cameron was on the team of Chef Ann Burrell, who served as his mentor during the show. Despite her gruff exterior, Cameron says that Burrell acted like a surrogate mom to him and that he was never afraid to ask her for help.

“I loved working with Chef Ann,” Cameron adds. “She is a very intense person, but I can’t imagine having this experience without her.”

The contestants work with their mentor chefs to learn new skills in a boot-camp style training. Two episodes into filming the show, Cameron remembers feeling the pressure of the high-takes competition.

“I called my mom and told her that I thought I was coming home after the next episode,” he recalls. “Everyone else was getting better, but it seemed like I was just getting worse!”

While Cameron’s exuberant personality and rapport with the other contestants quickly made him a fan favorite, his kitchen disasters often put him in a precarious position. Cameron found himself in the show’s “danger zone” six times and faced elimination three times, but ultimately went on to compete in the season finale.

“The moment that everything clicked for me was about halfway through,” Cameron remembers. “I was making lobster risotto, and Chef Ann said she would eat my recipe again. It was definitely a turning point.”

Cameron’s fondest memories of the show include an impressive list of kitchen injuries, including cutting his fingers while attempting to slice bell peppers using a cheese grater, being pinched by a crab, injuring his leg in a kitchen obstacle course and chipping his front tooth when searching for an elusive gold cupcake using only his face.

“In one episode, we all caught our dishes on fire and the entire sound stage was so thick with smoke,” Cameron said. “We certainly gave Food Network a run for their money. I felt so sorry for the culinary team that had to clean up after our dishes. I can’t imagine how many pans I ruined.”

Even though Cameron didn’t ultimately emerge as the grand prize winner, the experience was one that he will treasure for a lifetime.

“I got to work one-on-one with a world-renowned chef, and meet people from all across the nation,” Cameron reflects. “We instantly became friends for life. No one else will ever be able to understand the craziness and stress that we all went through.”

The season premiere came out right before Cameron’s 21st birthday, and he looks at the opportunity as the beginning of something great.

“I remember waking up in New York and thinking ‘Is this for real?’” he adds. “Even now, I can’t believe that I got to film a TV show in the middle of a pandemic. It was an experience like no other.”

“I am definitely a better cook than I was when I started,” Cameron says. “I’ve learned how to season things, I've learned knife cuts. I know how to get everything in place before I cook and learned some important techniques.”

Cameron is currently taking college courses, serving as the daycare cook in his church, and teaching weekly “Cooking with Cameron” sessions in a private Christian school.

“After being in New York and getting the vibe of the entertainment industry, I would love to find a way to be able to entertain people and make them laugh,” he adds.

“You never know what the future holds,” Chad adds. “America got to meet Cameron and see how genuine and entertaining he really is. And with the Bartletts, there is always something going on!”

“Yep, never a dull moment with this family!” Cameron quips.