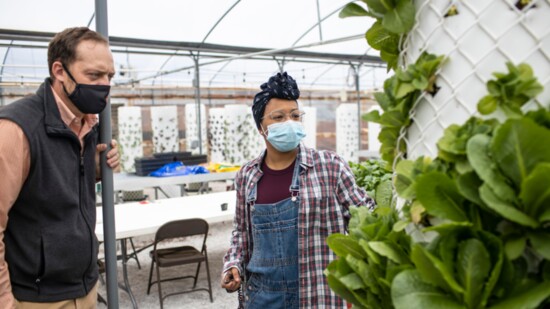 RestoreOKC, the nonprofit arm of Restore Farms, has been working on the project for several years, guided by an advisory board that includes urban agriculture educator Josh Campbell and horticulture specialist Julia Laughlin, both of the OSU Extension Oklahoma County office.

A store stocked with fresh collards and tomatoes is important enough to the community to draw a slate of speakers for its recent grand opening, including Oklahoma City Councilwoman Nikki Nice of Ward 7 and Marc Jones, president of the Homeland grocery store company. The municipality’s Embark transit service also announced it would offer local shuttle service to the store.

The 6,800-square-foot, full-service grocery store provides a much-needed respite in what’s been identified as a food desert – an area that has limited access to affordable and healthy food, according to the U.S. Department of Agriculture.

“When we look at negative trends in health and economic statistics, northeast Oklahoma City has struggled with this problem for many years,” Campbell said. “RestoreOKC and a handful of other initiatives have made big gains, but urban agriculture in the Oklahoma City metro has always been the missing piece.”

The Market at Eastpoint offers a variety of fresh, organic fruits and vegetables, grown on Restore’s five-acre urban farm. The farm is worked by about 20 high school students from northeast Oklahoma City. Campbell said he predicts other local, small garden producers will see commercial opportunities of their own.

“We’re hopeful that this is the first step toward the food desert becoming a food forest,” said Ann Miller, director of Restore Farm. “It’s been so uplifting to see all the work being done at the farm by our student interns and the passion they bring, their belief in themselves to turn this around. When we invest in them, we get so much more back in return.”

Homeland helped create the business model in the public-private partnership. RestoreOKC pays Homeland to provide management and infrastructure for operations, but the store will not carry the company’s brand.

The Inasmuch Foundation provided a grant for the store to be operated for at least three years.

“I believe this has created a model that can be replicated in other communities throughout Oklahoma City,” Dodson said.