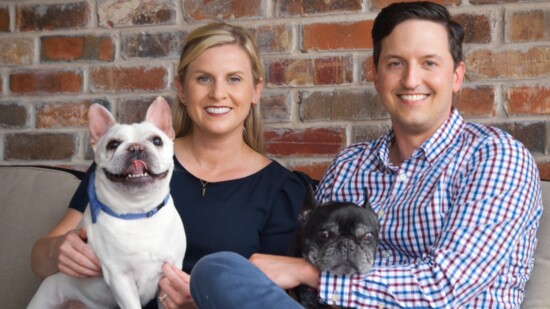 Photography by Krystyn Richardson of BOLD-Multimedia

Two very big personalities rule the roost in the home of Drs. Ben and Amber Bigbie—and both of them are only about a foot tall.

“Our French Bulldogs are like having a really large dog in a little body,” Ben explains. “They are so sweet and loving, and they have such big personalities. They are definitely very dramatic. You never have to wonder what they are thinking and feeling. If you make them mad, they will cut you a look. They can really show their emotions, whether they are happy, sad or disgruntled.”

The “Frenchies” came to reside in the Bigbie household when Ben and Amber wed in September 2020. Amber had owned Bandit for years when she and Ben started dating, and she adopted Bear as a puppy in 2019.

“I brought this madhouse with me,” Amber says, laughing. “The three of us came as a package deal when Ben and I got married.”

Amber grew up racing motocross and was introduced to French Bulldogs by another family in the racing industry from California. It was no time at all before she fell in love with the breed and adopted Bandit.

“No one in Oklahoma knew what Bandit was at first,” she reminisces. “They would call him an ‘interesting-looking Boston terrier’, and I would get the most confused looks from people when we were out in public. But now, Frenchies are really popular and you see them everywhere.”

Originally from Muskogee, Amber met Ben when she was in dental school at the OU College of Dentistry, where she earned a doctorate of dental surgery. Ben grew up in Ardmore and Norman, before completing a dermatology residency at the University of Oklahoma Health Sciences Center. The couple met in Tulsa and now resides in Norman.

Ben is a board-certified dermatologist and has performed thousands of surgeries to remove skin cancer through the Mohs technique at The Skin Cancer Center in Norman. Amber is a dentist at HWY 9 Dental Studio, a multi-doctor practice that cares for families and patients of all ages from Norman and surrounding areas. But the Doctors Bigbie aren’t the only members of the family who are well loved in the medical community.

“All the girls at work want Bandit and Bear to come in with me,” Amber jokes. “They love seeing the dogs, so they are pretty popular. Our vet appointments always take forever, too, because all the staff have to love on them every time we take them in.”

The Bigbie bulldogs have very distinct temperaments, making each dog a unique member of the family. Bear, now 21/2 years old, is sweet, charming, goofy and easily motivated by food. Bandit is nearly 12 years old, and is the smart, stubborn alpha dog of the household. “Bandit’s obedience level goes as far as he wants it to,” explains Ben. “I trained him to do tricks, but he will only do them if he is so inclined.”

One of the Bigbie’s favorite anecdotes of their dogs was when Bear chewed up an orange-colored Sharpie marker.

“Bandit immediately came and tattled on Bear, and sure enough, Bear had a bright orange tongue,” Amber shares. “But then we found some tell-tale orange marker on Bandit’s paws, so we knew he wasn’t totally innocent either!”

In April 2020, the family received a shock when Bandit became ill and ended up requiring emergency veterinary care. Bandit was ultimately diagnosed with cancer and underwent a splenectomy. His veterinarian gave him less than 3 months to live.

“More than a year later and he’s still doing great,” Amber says. “When we thought he only had a few months to live, I started making him roast beef every Sunday. Now he has just come to expect it.”

Ben explains that only 10% of dogs with Bandit’s diagnosis make it more than a year, and attributes Bandit’s incredible survival to his headstrong bulldog personality.

“He’s just stubborn enough that he wants to stick around so Bear won’t get his toys,” he quips.

In the Bigbie house, the dogs have their own room, wear special hats and bow ties during birthday celebrations and have stockings at Christmastime.

“Honestly, they have their own room because they snore super loud,” Ben explains. “We just tell them it is bedtime and they go to bed. Bandit gets cold, so he likes to wear pajamas in the wintertime. They just have no idea that they are dogs.”

Amber encourages others who are interested in the breed to consider bringing one of these smart, funny dogs into their household.

“You do have to be very careful with Frenchies in Oklahoma,” she adds. “They can’t cool themselves well enough in summer, so they can get overheated in the Oklahoma heat. They also can’t swim, so you have to be careful if they are around any bodies of water, even something as small as a koi pond. They are like little kids; you have to make them come inside when it's hot and make sure they have on their life jackets.”

Looking back, Ben can’t imagine his life without Amber and their Frenchies.

“I fell in love with them on the very first date,” he concludes. “I always thought I was a Labrador guy, but now I can’t imagine anything else but this wonderful life with our French bulldogs.” 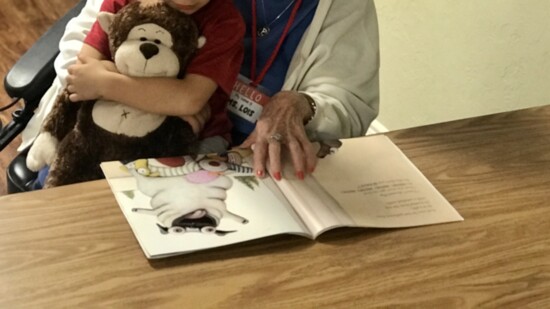