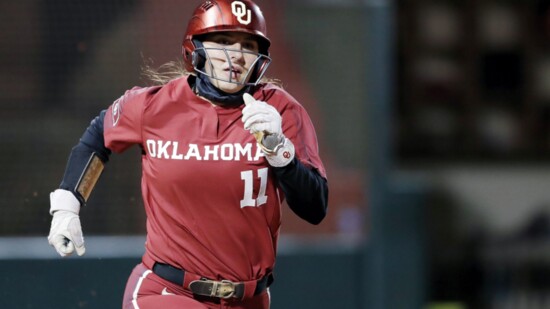 A prism takes a beam of light and breaks it into many colors. Nicole Mendes is much like a prism. She is a talented player, leader, advocate, future Olympian and person of faith. The combination makes up a composed picture.

The fifth-year senior on the Sooner softball team has been a starter at each outfield position, first base and designated player. She has even taken the ball from Coach Patty Gasso inside the pitcher’s circle to start or relieve as a pitcher.

She is a leader on the softball field and in student-athlete governance groups. Leadership roles started on the Norman campus, and that led to the Big 12 and the NCAA. She has a very strong connection to her faith and is quick to share the role it plays in her life. She is going to be an Olympian this summer as a member of the Olympic team from Mexico. Finally, she took a sensitive issue that she had experiences with and encouraged people to make it a point of emphasis.

COVID-19 presented a different set of challenges than she had ever encountered. Mendes, who was coming off a fall 2019 knee surgery, played in six games last spring before everything shut down. Remembering what was lost has given Mendes a different approach to 2021.

“I am trying to really enjoy every moment we have,” Mendes said. “We are so fortunate to be playing games this spring. It has taken so much effort from so many to ensure we are doing the things we must do to compete in a safe, secure bubble. I want to enjoy this year like no other.”

Playing in the Olympics has been a dream for Mendes since she was 8 years old. Playing Division I softball will be her path to the reality. “I will head to Mexico after our OU season is over. We will train in Mexico before heading to Japan. The Olympics will begin, and I will be there.”

“Kelsey was involved here at OU and she took me with her to a meeting. I got to be a Big 12 rep for SAAC. I learned how to be a leader, how to use my voice. It gave me an opportunity to learn beyond the classroom. That is encouraged at OU—take things learned in the classroom and turn them into valuable life lessons.”

She earned her degree in Planned Programs – Social Influence at the end of the fall 2020 semester and is working on her master’s degree in human relations. She hopes to play pro softball after she finishes her master’s degree, then she would like to get involved in broadcasting. She has discovered she enjoys finding the unique stories that people have, then helping them share those stories.

In some ways, that part of her passion led her to another interest. A close friend, who was struggling with some serious issues, reached out to Mendes.

“I did not know what to say. I didn’t know how to respond to her. I wasn’t sure of the best way to help her.”

A year later, it was Mendes who was struggling.

“I came into my sophomore year after a great freshman season and something wasn’t right. I didn’t enjoy being around softball. Everything was so good for me; why was I sad? With help, I learned it was OK to be sad. It was OK for me not to be OK. I also knew I wasn’t the only student-athlete dealing with depression and other mental health issues.”

She reached out to OU’s student-athletes and worked with PROS (Psychological Resources for OU Student-Athletes). Those efforts led to additional mental health programs at OU, including Mental Health Days and Mental Health games.

Mendes gave OU a non-binding commitment as a seventh or eighth grader. She knew then there was something special about her coach.

“Coach Gasso is incredible. She really is a boss lady. People see her physical size and dismiss her. That’s a big mistake. She is an amazing softball coach. She loves softball and loves to coach. Her passion for both shows.

“Girls come to OU to play softball and they don’t really know who they are or what they want to do. We learn from Coach Gasso how to be strong, how to speak up and talk for those who can’t. She has a strong commitment to her faith, and she is not afraid to show that. She has helped me learn even more what God has done in my life.

“Who would have expected that my dreams would become my reality? The blessings I have been given have led me to experience a reality that came from my dreams. I would not be where I am today without Coach Gasso and without God.”

A prism is too small to represent Mendes. A kaleidoscope takes multiple colors and creates stunning pictures. Now you know the kaleidoscope that is Sooner Nicole Mendes.