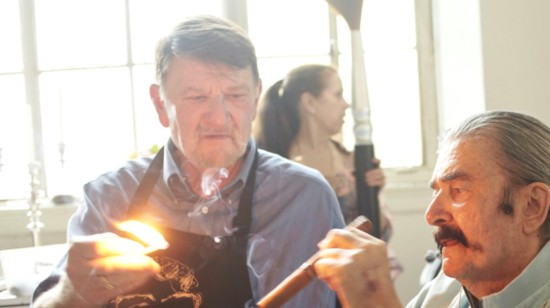 The Life and Career of Chef John Bennett

I was going to write this tribute myself, but it wasn't for me to write. Like my friend Dave Cathey, I met chef Bennett while interviewing him about his friendship with Julia Child. It was 2012 when I met him, the 100th anniversary of her birth. Chef was one of those people you immediately knew you adored. Recently, I approached Dave for some extra anecdotes. "Dave and John" were a packaged deal at events around the city. In talking, it was clear to me immediately that the only person who could adequately honor "JB" was Dave Cathey. Thank you, friend.
–Amanda Jane Simcoe


This summer we bid farewell to one of Oklahoma’s most important figures in the culinary arts, chef John Bennett.

I first met JB a decade ago to write a story about his lifelong friendship with Julia Child. Little did I know it was the start of one of the most important friendships in my life. JB was a great mentor, storyteller and chef, but also a loyal friend. He was always generous with his recipes to those who were sufficiently effusive with their praise of a dish. But that wasn’t difficult because JB was a stone-cold killer over the stove.

Of course, he knew over the stove wasn’t where you sold the sizzle. He joined Frank Hightower and culinary icon James Beard to open Oklahoma City’s first fine-dining restaurant beneath the Hightower Building, The Cellar, in 1964. But he spent a short time as executive chef before hiring his own replacement, chef Robert Dickson, to become the restaurant’s director.

As director, he traveled to France to bring back the best wines the world had to offer at the time. JB loved to talk about how the bottles he brought back from those trips were too expensive for most folks, so he had to drink them with friends!

JB worked his entire life to draw attention to Oklahoma cuisine, proudly serving Oklahoma favorites like Arbuckle Mountain Oysters at the James Beard House in New York City. With his passing, the local hospitality community is working to keep his legacy alive and growing.

Look for events around the city in JB’s honor starting this fall to help create a scholarship in his name at the University of Central Oklahoma.

To follow are some of JB’s favorite recipes; the famous Cellar Clam Chowder was a favorite citywide. His crab cakes might’ve been even more legendary. Many years ago, after I first tried crab cakes at Rococo, I was quick to tell anyone who would listen they were the best in town. I heard more than once: “How do they compare to John Bennett’s?” Make them and decide for yourself.

Finally, there is the famous Parmesan Cheese Toast. Whatever you do, do NOT refer to them as toast points. He will haunt those that do. This is an incredibly simple recipe that yields a highly addictive, extraordinarily versatile fancy snack. They gussy up any spread but work just fine parked next to the recliner with a glass of wine (or three).

If there’s anything JB liked to preach, it was, “Anything worth doing is worth over-doing.” Let these dishes inspire your ambition to entertain.

You’ll find more recipes like this plus the story of chef John Bennett’s life on a new memorial blog called "Chef’s Manor." You can find it online at WordPress.com/Pages/ChefsManor.WordPress.com.

Dave Cathey has been Food Editor for The Oklahoman since 2008 and is the author “Classic Restaurants of Oklahoma City” and “The Culinary History of Pittsburg County: Little Italy, Choctaw Beer and Lamb Fries.”