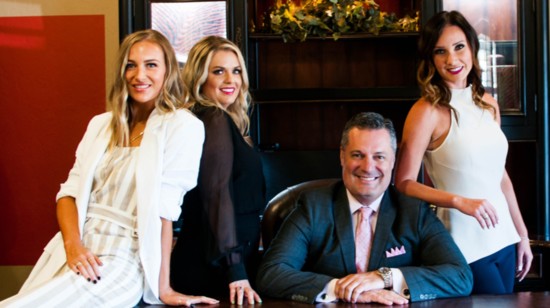 Rock Stars in Life & the Courtroom

If you have been on the McIntyre Law website (McIntyreLaw.com) and viewed the firm photo and individual employee photos, you probably noticed a hiring trend. The firm is almost entirely staffed by strong, independent women. That was no accident.

Noble McIntyre, president and managing partner of the law firm located in South Oklahoma City, has made it a lifelong priority to identify, hire and train women who want a career in law.

“I have a mother and three sisters and a wife and three daughters and I’m very aware there are times where they must work twice as hard just to be granted the same opportunities as others,” he says. “I don’t like that for my sisters, daughters or employees. The women I’ve hired are incredibly intelligent, extremely hard-working and very loyal to the firm.  I have some absolute rock stars working for me, and I would take my team over anyone.”

McIntyre Law is a personal injury law firm devoted to helping clients and their families navigate the devastating physical, financial and emotional healing processes necessary when catastrophic injury, or sadly sometimes death, occurs as the result of another’s negligent actions. The firm represents Oklahoma clients as well as clients across the country. With a reputation for expert representation, the lawyers (male and female!) at McIntyre Law prepare for every case as if it is going to trial.

Beyond the Power Suit

When you think about trial lawyers, you probably think crisp, custom, well-tailored, dark blue or black power suits. There are times that is true. But the life as a trial lawyer isn’t reserved just for the trials. While they may don such power suits for the courtroom and other formal settings, three attorneys at McIntyre Law recently revealed a flair for more expressive clothing and accessories.

Jordan Klingler is a partner at McIntyre Law and is a key part of the firm’s future plans. Jordan made partner on a fast-track and by virtue of becoming a crucial component to the firm’s marketing plans (she is the voice and face of multiple television, radio and billboard campaigns). She has significantly broadened the firm’s litigation capabilities and market presence.

Jordan joined McIntyre Law after working for a major insurance company handling insurance defense litigation. Her background in defense work has provided a unique perspective in case evaluation and prosecution as she has inside knowledge into the defense playbook. She has parlayed these insights into first chair trial experience and results for her clients.

“The defense bar has more diversity than we do because their corporate clients demand it,” says Jordan. “On the plaintiff side, opportunities are harder to come by, which makes it more difficult to gain the experience and confidence needed to advance your career.”

Jordan describes the challenges faced by women trial lawyers. “Women have to master a balancing act. We need to be competent and confident handling the cases entrusted to us, while still being ourselves and without abandoning the positive traits associated with being female. With Oklahoma clients and in our courtrooms, that balance is a sweet steeliness.”

Jordan earned her law degree from the Oklahoma City University School of Law and her undergraduate degree in business administration from the University of Central Oklahoma. She was awarded Oklahoma’s 2019 Class of the Top Young Professionals Under the Age of 40, Lawyers of Distinction in 2019 and Outstanding New Lawyer of OAJ in 2018.

Monica Kuykendall Schweighart is an associate attorney at McIntyre Law who focuses primarily on automobile injury cases and vicious dog attacks. She is committed to keeping her clients informed throughout every step of the legal process and always strives to obtain the best results for her injured clients.

She joined the firm immediately after law school. In reality, her initial interview with Noble McIntyre wasn’t really an interview at all.  It was simply a meeting she had requested at the suggestion of a attorney friend who indicted that he could provide her some insight in the area of personal injury law. She left the meeting with a job offer.

Monica was born to be a trial lawyer. She was raised in Norman, and as a young child she would watch her father, Tim Kuykendall, former district attorney for Cleveland County, at trial. It was then that she decided she wanted to pursue a career in law and to use that career to speak for those who do not always have a voice.

“When I was very young, I would go to the courthouse to watch my father in action. His level of integrity, professionalism and compassion is always something that impressed everyone in the room, including me. Getting the opportunity to see how he utilized those traits to better the lives of others in the community is probably what made me the attorney I am today.”

Abby Herren is an associate attorney at McIntyre Law and is the newest addition to the McIntyre Law team of attorneys. Her strengths in research and writing have already provided an immeasurable benefit to the firm as her efforts and contributions have freed up other attorneys in the office, allowing them to focus more intently on case strategy and advancement.

When asked about her decision to become a lawyer, Abby responded, “I struggled with what to do after graduating college. What I wanted to do (travel the word with my camera and get paid for it) was not realistic. My mom, who wanted me to be a lawyer since I was little, talked me into taking the LSAT. With my frame of mind being “if it’s meant to be, it will happen,” I took the LSAT. Shortly thereafter I found myself walking into the front doors of the University of Oklahoma College of Law for my first day of law school. Becoming a lawyer is not what I planned, nor foresaw; it was pure serendipity, and it is the very best thing I have ever done.”

Abby earned her law degree from the OU College of Law in May of 2018, passed the Oklahoma bar in July of 2018, and was proudly sworn in as an attorney in September of 2018. She also earned an undergraduate degree in fine arts, with a specialization in photography, from OU.

Originally hired on a contract basis to fill in during the absence of another employee, Abby quickly demonstrated her value and importance to the firm. When the initial term of her contract employment ended, there was little discussion. Abby simply stayed, and the firm is better for it.

Our photo shoot wouldn’t have been the success it was without the help of several local businesses. Lewis Jewelers (Lewis-Jewelers.com) in Moore, one of the premier fine jewelry stores in the entire southwest, helped add some nice dazzle to the photo shoot by loaning a selection of fine jewelry to the women trial lawyers of McIntyre Law.

And Sheena Mullins with Salon Audace (SalonAudace.com) in Norman lent her considerable talents on-site as our models’ hair stylist.

Photo 2 - Jordan Klingler, Monica Kuykendall Schweighart and Abby Herren have that simple, but pulled together look. Outfits worn by Jordan and Abby described in earlier photo. In this photo, Monica is wearing a black pencil skirt ($289) and flowy body suit ($399) from CK & CO.

Our photo shoot wouldn’t have been the success it was without the help of several local businesses. Lewis Jewelers (Lewis-jewelers.com) in Moore, one of the premier fine jewelry stores in the entire southwest, helped add some nice dazzle to the photo shoot by loaning a selection of fine jewelry to the women trial lawyers of McIntyre Law.

Photo 7 - Sheena Mullins with Salon Audace poses with the attorney-models.

The Meadows Center For Opportunity