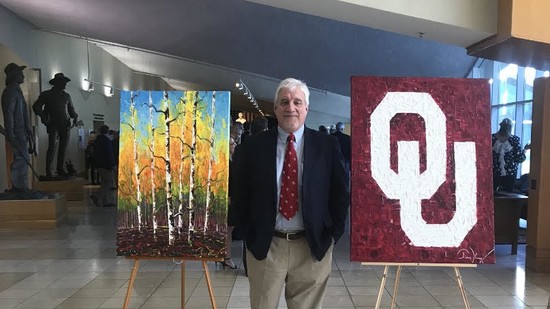 The Art of Philanthropy

When you ask Tim Kenney to describe his life as an artist, he uses words like “incredible,” “unintended,” “crazy” and “wonderful.” The Norman-based artist was 52 years old when he left an established marketing career at St. Anthony Hospital for a new adventure.

“My mother was having medical issues,” Tim explains. “I needed to be able to stay home and take care of her.”

After stepping out of his corporate job, Tim received a call from a relative who is an art dealer in Santa Fe.

“He asked if I was willing to deliver a painting to Dallas, which I accepted,” he explains. “That was the moment that I fell in love with the art business. I saw so many possibilities. It never left my mind from that moment.”

“I never thought it would be easy to become an artist, but I genuinely thought I could do it,” he reminisces.

Tim paints as an abstract impressionist, often using bright colors and multi-dimensional textures that give his art instant recognition.

“My first year, I made exactly zero dollars,” he laughs. “But I never imagined the experiences I would have.”

Shortly after he began painting, the Norman Chamber of Commerce approached Tim to donate a painting for a fundraising auction.

“After giving it a lot of thought, I created and donated a piece,” he says. “It sold for $500 and I was thrilled.”

He has since donated paintings to the American Heart Association, Assistance League of Norman, United Way of Norman, Children’s Hospital, and more than 25 other nonprofit organizations.

“Philanthropy is a big part of who I am,” he adds. “This is an unexpected, wonderful part of the painting business. I am thankful for the great people that I have met and the ability to give back to my community.”

One cause that has grown near to Tim’s heart is the Nicole Jarvis, M.D., Parkinson’s Research Foundation. Eight years ago, he was asked to donate a painting to the first Winter Gala that Dr. Jarvis, who has early onset Parkinson’s Disease, held to raise money for the Michael J. Fox Foundation for Parkinson’s Research. He has continued to support the foundation for the past 12 years and will serve as the featured speaker at this year’s annual gala on Dec. 12.

Tim has also donated more than $18,000 to the Foundation in 2014 through a special project where he visited 50 states in 50 days and created 50 unique paintings. In 2017, he created 77 paintings of the 77 counties in Oklahoma in 77 days, again with a portion of proceeds benefiting the Jarvis Foundation.

“The trip was a wonderful journey through our country, where I got to meet so many people who were connected to Parkinson’s in one way or another,” he adds.

Tim’s dedication to helping those with Parkinson’s Disease led to him being one of three featured artists nationwide in the “Live Well, Do Tell” awareness campaign, sponsored by Acorda Therapeutics. For the project, Tim creating two painting inspired by the stories of two individuals with Parkinson’s; they can be viewed at LiveWellDoTell.org.

“I like to say that I am an old man, but a very young artist,” he concludes. “I am nowhere near the best artist that I will be in the future. But I believe I improve with every painting. This journey has been amazing.”

To purchase tickets to see Tim as the featured speaker at the 2019 Winter Gala or to learn more about the Nicole Jarvis M.D. Parkinson’s Research Foundation, visit JarvisMDParkinsonsFoundation.org.  Follow Tim on Facebook at Tim Kenney Art and learn more at TimKenneyFineArt.com.