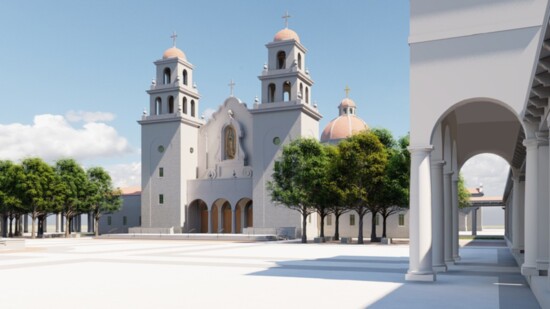 Honoring the Legacy of America’s & Oklahoma's Only Catholic Martyr

Photography by Sue Bond and Provided

When you’re connected with someone who’s sacrificed everything to help the less fortunate, sharing and continuing that person’s legacy can be a sacred trust.

That’s certainly the case for Sue Rother Bond, whose father was a cousin of America’s first and only official Catholic martyr—Oklahoma-born priest Blessed Stanley Rother. Bond honors the memory of her famous relative in a variety of ways, including serving on the board of the Blessed Stanley Rother Shrine. Now under construction in Oklahoma City, the 2,200-seat shrine and accompanying museum is scheduled for completion in July 2022.

In 2018 Bond wrote and illustrated a children’s book about Rother titled Blessed Stanley Rother: An Extraordinary Life. Along with her husband, orthopedic surgeon Dr. James Bond, she also created an accompanying puppet show about Rother’s life that they present to school-age children.

Bond self-published her book, so that 100% of the funds support causes aligned with Blessed Stanley’s values. Among other projects, the Bonds sent food to his former Guatemalan parishioners who were severely impacted during the COVID lockdown and purchased more than 3,000 trees to beautify the grounds of the new shrine.

The Story of Blessed Stanley Rother

Father Stanley Rother’s story is one of tremendous dedication to the spiritual flock for whom he laid down his life.

Born during the Great Depression into a Catholic farming family in Okarche, Stanley soon determined he wanted to become a priest.

After completing seminary and serving several years in Oklahoma, Father Rother received permission to join the Oklahoma Catholic Archdiocese’s mission in Santiago Atitlan, Guatemala in 1968. For nearly 13 years, he would live and work amongst the poverty-stricken native tribe of the Tz’utujil, who are Mayan descendants. Although he had struggled with Latin, he became fluent in both Spanish and the tribe’s native dialect—even creating a Bible translation in the latter language.

He assisted the tribe with both spiritual and practical matters, spearheading the building of a parish hall, hospital and radio station, developing irrigation systems, teaching farming techniques, and even importing a tractor from his family’s farm to assist with agriculture.

“He plowed the fields side-by-side with his parishioners,” Bond said. “He taught them about God with not only words, but by acts of love. He loved the people of his parish, and they loved him.”

When a civil war broke out in Guatemala in 1980, the Catholic church was targeted by the government. Parishioners were killed, taken hostage and tortured, and Father Stanley’s name was among those added to the government’s “death list.”

At the Oklahoma Archbishop’s request, Rother returned to the States, but soon returned to Guatemala, saying simply “The shepherd cannot run at the first sign of danger.” Three months later, on July 28, 1981, intruders entered the parish and executed Rother.

On Dec. 1, 2016, at the request of the Oklahoma Archdiocese, Pope Francis officially recognized Father Rother as a martyr for the faith— the first from the United States and the first U.S.-born priest to be beatified. (Beatification is a necessary step along the process toward declared sainthood, and adds the title of “Blessed” to the individual’s name.) The Rite of Beatification was held in Oklahoma City on Sept. 23, 2017, and was attended by more than 20,000 people. Bond said the family and church members are hopeful that Blessed Stanley Rother will eventually be canonized as a saint.

“Blessed Stanley gives us an ordinary hero we can all live up to,” Bond said. “We all can strengthen our faith and love for our neighbor through everyday actions of kindness and develop courage through adversity to stand up for what is right at all costs.”

Carrying on the Legacy

Father Stanley’s life was chronicled in the well-received biography The Shepherd Who Didn’t Run by Maria Scaperlanda. However, Bond said, she felt something still was needed to reach a younger audience.

“As the mother of five children, I have always been creative with sharing stories with my children, and they always loved the bedtime stories of Blessed Stan,” she said. “So, I decided to write a fully illustrated children’s book to share his story.”

The book was an immediate hit, and has been translated into both Spanish and Tz’utujil.

“I have shipped books to nearly every state in the U.S. and also to people of many Christian denominations,” she added. “His story seems to transcend Catholicism and Christianity. Blessed Stanley’s story inspires us all to become the best version of ourselves by loving and taking care of an underserved population at any cost.”

Bond’s book, along with other Rother-related items, is available for purchase through the Oklahoma Archdiocese website, www.archokc.org. It also can be purchased by emailing blessedstanleybook@gmail.com for a secure credit card link, via Facebook, @blessedstanleyrother, and through Amazon and local Catholic bookstores. More information about the shrine can be found at www.archokc.org/shrine.

“Blessed Stanley’s story is powerful because anyone can identify with it,” Bond said. “He was not exceptionally tall or fast or strong. He was an ordinary farm boy whose courage and faith grew throughout his life. All of us have opportunities during any ordinary day to show compassion and help someone in need and listen to what God calls us to do. As Oklahomans, we are all familiar with hard work and rolling up our sleeves to help our neighbor. Especially in today’s time of division and hate, these ordinary values can serve our world extraordinarily.”