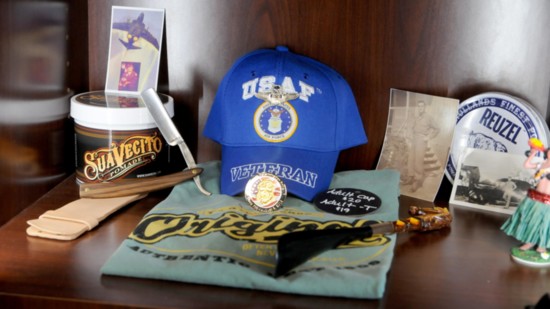 V's Barbershop Is as Old-School as it Gets, but with a Modern Flair

The gentleman sat in the 1950s barber chair facing the mirror while the barber puffed hot lather along his neck. Pulling out a straight razor, the barber scraped the blade over the neck stubble as Frank Sinatra crooned about going to the moon.

In another chair, a machine attached to the barber's hand hummed as he administered a head massage, utilizing a skill that was used in the 1940s. The smell of V's Signature Tonic floated through the air as the snip of scissors kept beat with the "swish swish" of the Sole Brothers shoe shine in the front corner.

Located at 300 W. Memorial Road Suite 119, V's Barbershop is as old-school as it gets, but with a modern flair. You can get a haircut for $25 here, complete with a complimentary neck shave, hot lather, massage and tonic finish. Deluxe beard trims and "fades" are popular, and a traditional shave can be paired with a soothing facial or deep witch hazel steaming.

Along the walls, the black and white stares of sports greats from decades past share space with the patches, flags and challenge pins of the U.S. Military, local law enforcement and fire brigades and first responders.

You won't find "hipster" prices or crazy haircuts at V's Barbershop—just a good old-fashioned barbershop experience that is attracting the gentlemen of old alongside customers of the modern age.

"It's just that old-school barbershop feel—the smell and look as you walk out the door. You remember this experience the minute you leave," says Sharif Khan, who opened Oklahoma City's V's Barbershop with his wife, Stacie. "The older generation comes in here, and it's like they stepped back in time. But on the flip side of that is when the dads or the grandfathers bring their kids in. It's an experience you remember."

Franchise owners Sharif and Stacie Khan moved to Oklahoma City from Houston a little over a year ago. They used to take their son to a V’s in Houston, where they became big fans of the old-school barbershop look.

“Opening a barbershop has been a dream of mine for years,” Sharif says. “True barbershops today are a lost art because most places are now salons. We wanted to bring a tradition to Oklahoma that hasn’t been seen in years. It's a traditional luxury, but our price point is affordable for anybody to come in here. It's not over-the-top."

The shop is lined with six antique Koken chairs from the 1950s that were located and purchased by a brokerage for V’s. The barbers are all licensed with additional licensing to use the straight razor.

As a former U.S. Marine, Sharif also wanted to honor those who serve their country and community. They offer a 20% discount to the military, law enforcement and first responders.

"But our shop has taken it to the next level. We collect the patches and get memorabilia, and that shows those military and first responders that we care," he says.

With six barbers who are experts at what they do, a love for the military heroes of the state and a dream to bring an old-school shave to a new generation, Sharif says his dream of opening a barbershop in Oklahoma City is finally realized. 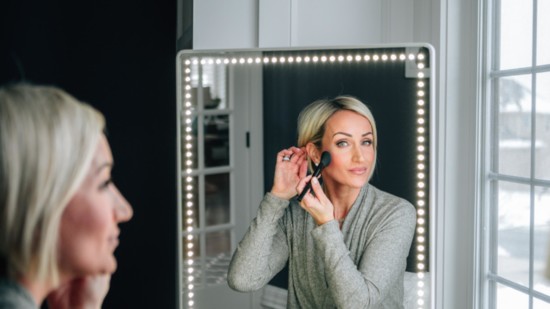