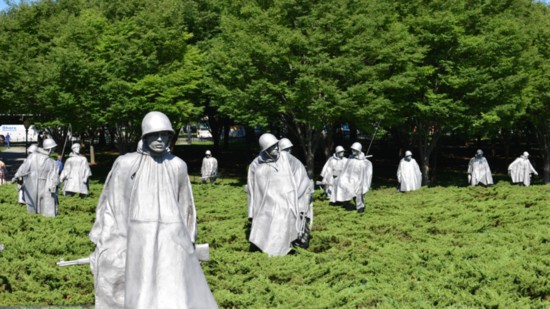 With Stops at War Memorials, The Smithsonian, White House and Beyond

Before I share with you my passion to travel to America’s Historic East, I judged we should talk about passports. No, you don’t need a passport to travel to Washington, D.C.; however there is information you need to know about Real ID Enforcement. Oklahoma is one of the few states left that has not met the established minimum-security standards for license issuance, which prohibits federal agencies from accepting certain purposed driver’s licenses and identification cards from states not meeting the Act’s minimum standards.

The purposes covered by the Act include boarding federally regulated commercial aircrafts. The U.S. Department of Homeland Security granted Oklahoma’s extension request until Oct. 10, 2019. The reason we tell you this is if Oklahoma has not completed the compliance requirements by Oct. 10 and met the minimum-security standards, it is possible Oklahoma will not get another extension; therefore, you will not be able to use your driver’s license to fly on a commercial carrier out of Oklahoma.

So...we highly recommend you secure a passport, which becomes your No. 1 form of ID. If you don’t have a passport, you can begin the process by going to Travel.State.gov. First-time applicants will fill out the DS11 application.

Starting in Washington, D.C., America’s history will jump out at you at every stop. Some of my favorites are the Lincoln, World War II, Vietnam and Korean memorials. When we were at the Korean memorial, it was early in the morning. The fog put an eerie feeling to the site and you could almost hear the soldiers walking on the grass and branches.

I especially enjoy going to George Washington’s Mount Vernon. It is a beautiful setting. Touring the Mansion, I always giggle at how small the beds are.

Plan at least four to five hours at the Smithsonian. Several years ago, I was honored to pass off Amelia Earhart’s Aviator’s Certificate from the 99’s Museum of Women Pilots here in Oklahoma City as a loan to the Smithsonian for a year. It was an amazing feeling holding her certificate in my hands.

Of course you don’t want to miss the Capitol, the White House and Arlington National Cemetery. Did you know: when you plan a visit to the Capitol prior to leaving, contact your representative’s or senator’s office; if possible, their staff will make arrangement for you to take a tour.

I could go on and on about Washington, D.C. Just plan to spend as much time as you can there. A guided tour is always a great way to see everything. Your guides know the ins and outs and the best routes to take to make the most of your time.

From there, you must head north to Williamsburg, Virginia, the city that played a significant role in the Revaluation. When you enter the Colonial Williamsburg’s Historic area, you will step back in time, where costumed villagers add to the authenticity.

As you venture north, take time to hike some of the trails in Shenandoah Valley National Park. Did you know: The Third Battle of Winchester on Sept. 19, 1864, was the largest and bloodiest Civil War battle in the Shenandoah Valley.

Continue to Harpers Ferry, a town in West Virginia. Paths wind through Harpers Ferry National Historical Park, which has 19th-century buildings, a Civil War Museum and John Brown’s Fort, a key site in an 1859 abolitionist raid.

Gettysburg… Oh my, it gives me goose bumps to even think about this area! You will be able to stand in the area where Abraham Lincoln made his 1863 Gettysburg address. The Gettysburg Cyclorama titled “Pickets Last Charge” is presented in a 360-degree theatre with surround sound. Did you know: Casualties at Gettysburg totaled 23,049 for the Union. Confederate casualties were 28,063. To put this in perspective, that is almost two-thirds of the OU Gaylord Family – Oklahoma Memorial Stadium seating.

To end your tour, make your way to Philadelphia with a stop there to see the Liberty Bell and stand in the room where the Declaration of Independence was signed.

Bonnie J. Hedges CTC/CTS, is vice president of sales and marketing for Travel Leaders Bentley Hedges Travel. Contact one of Bentley Hedges’ professional travel agents to book your own unique travel package to the America's Historic East Coast in person at their office at 10021 S. Pennsylvania Ave., in Oklahoma City, online at bhtravel.com or call 237.3333.