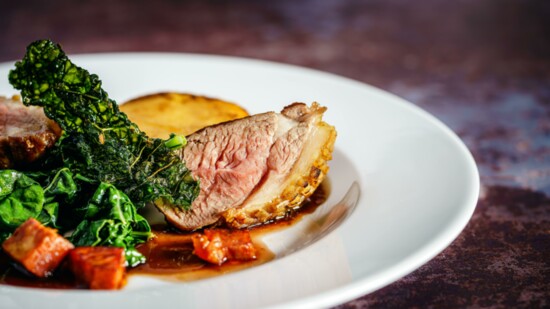 For those locals who frequent Dana Point Harbor, Gemmell’s Restaurant is a well-known landmark. Owned and operated by Chef Byron Gemmell, and his wife Barbara Tagudar, the establishment is a favorite for those seeking truly authentic, and masterfully prepared, French cuisine. When visiting Gemmell’s, you’ll immediately take note of its dimly lit dining room, with freshly pressed, white table linens. The atmosphere is elegant, yet unassuming, and Chef Byron is regularly seen working the room—ensuring his guests are enjoying their meals as much as he enjoyed preparing them.

Born in Guatemala, this master chef learned the art of French cooking at the famous L’Ermitage in Beverly Hills, arguably one of the finest French restaurants in the United States at the time. And his mentors were some of the world’s most renowned chefs. This was 1971—a golden era of French cooking on the West Coast. In the mid-late 1970s, Los Angeles burst to culinary prominence and rivaled New York City as a US capital of Nouvelle Cuisine. Chef Byron’s expertise is grounded in this Los Angeles fine-dining revolution.

In 1979, Chef Byron opened La Cuisine in Dana Point in the location that is currently Luciana’s Ristorante. It was during this period that he was named Chef of the Year, by the Southern California Restaurant Writers Association, for his impeccable cuisine and uncompromised service.

This successful undertaking was followed by his original Gemmell’s Restaurant in Costa Mesa on the corner of Baker and Bristol (currently the location of Wahoo’s Fish Tacos). Then, after closing this Costa Mesa enterprise in 1989, Byron went on to further hone his culinary skills in Santa Monica with his longtime mentor, Chef Jean-Pierre Penne.

Now, after 20 years at their current Dana Point Harbor location, Byron and Barbara are still delivering a true, old-world French dining experience like no other in the region.

When you visit Gemmell’s, your pallet will not be disappointed. Note that Chef Byron is best known for his incredible Roasted Rack of Lamb and Roasted Duck dishes. My personal favorite is the slow-roasted sliced Napa Duck. Served in a dark rum and banana liquor reduction sauce—and paired with a caramelized banana spear—this most satisfying dish is complemented by fresh market vegetables and garlic baby roasted potatoes. Gemmell’s Restaurant is in the Dana Point Harbor at 34471 Golden Lantern. For reservations, call (949) 234-0063 or visit GemmellRestaurant.com.