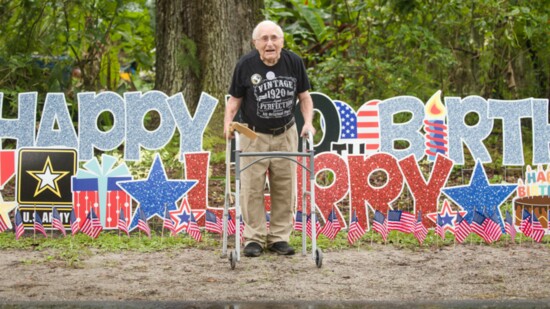 A HERO AMONG US

Winter Garden resident Lawrence Cheever (referred to as Larry by family and friends) was born on September 20th, 1920, and he is 100 years old.

Now, being 100 years old comes with some fascinating realities. For example, Larry knew his grandmother; he would see her regularly until her death, which was when he was 15 years old. His memories of her are quite tangible. The reason why this is particularly interesting is because Larry’s grandmother was born in 1850. That means she was about 11 years old when the Civil War broke out and about 15 years old when it ended! That places Larry one degree away from someone who lived through the American Civil War! Not only this, but Larry’s grandfather actually fought in the Civil War for the North. The allure of Larry’s history does not end there- Larry’s family can trace themselves back directly to living in Massachusetts- during the American Revolution.

For years Larry has told his life stories to his family and friends, even wrote some down. Many of them sound like classic All-American moments.

“I remember one time in the winter a little child put his mouth around the steel pole on the merry go round.  His tongue stuck fast to the frosty pole and the teacher came and put snow on it till it let go.  If he had pulled his tongue loose it would have taken all its skin off it,” said Larry recalling a story that took place in the 1920s.

Larry has countless tales, but this July, as we celebrate the blessing of our national independence, we focus on why we acknowledge Larry Cheever as a hero among us.

He was 19 years old when the United States entered World War II, and he was one of the first waves of young men to be drafted. Larry explained that at the Induction Center, they swiftly ushered all the boys into a building and into a line in which they gave them a paper to sign. This is where Larry first realized he was going to have some difficulty being an army man.

After signing, he became a member of the 451st Triple-A Battalion and immediately came into conflict with his superior, a man Larry would never forget, Captain Lossen.

Larry recalls, “I had strikes against me the moment I entered the army.  I was a Seventh-day Adventist who believed in keeping the true Sabbath of the Lord as commanded in God’s word.  The other was that I objected to carrying a gun to kill my fellow man.  Consequently, Capt. Lossen and I had many unhappy meetings together.”

Throughout the war, Larry stood by his faith and beliefs as a Seventh Day Adventist Christian. On one occasion, Captain Lossen called him into his office and lambasted him, stating that if everyone believed as Larry did, that the enemy would come and take them all. Larry replied respectfully to his captain and explained that if everyone believed as he did, there would be no conflicts. As he put it, “the Lord would take care of us, and we wouldn’t have to fight.”

Many times Captain Lossen threatened Larry with a Court Martial. Larry was beside himself and did not know what to do, and he wanted to serve his country and knew his faith and believed he could serve without having to fire a weapon at another human. Just before going overseas, Larry wrote to the nearest SDA Church explaining his situation to the pastor. This pastor came to Larry’s base and spoke with Captain Lossen’s superior, who then arranged for Larry to be a medic, where he was able to serve his country in the war effort without sacrificing his beliefs.

Where Larry saw the most action and horror was during his time in the Italian campaign of the war, especially in the Battle of Anzio, where the Allied Forces faced thousands of casualties. Larry was also present during the last major offensive by Hitler, the Battle of the Bulge, which paved the way to the Allied Victory.

However, the moment that codified Larry’s personal heroism is when he saved two men who were suffering potentially fatal injuries in the middle of a minefield. Portions of their bodies had been mutilated due to their stepping on mines in the field in which they laid. Larry, along with his friend “Shorty” Sturgeon, did not hesitate to walk out into that live minefield, risking their own lives, to save the two men… and they did.

The war did not end without Larry seeing his old Captain again, the one that gave him so much trouble at the beginning of the war. Larry was at a ceremony where he received the bronzed medal for his actions in helping to save the lives of those men in the minefield. The man who pinned the medal on him was more than notable, Captain Lossen himself.

After the war, he went to college, where he met the love of his life, Lois Bale. They married and moved down to Winter Garden, where they created a beautiful life and family together. They spent 69 beautiful years together before her passing in 2018.

Among his many achievements, Larry also took part in building the first Seventh-day Adventist Church in Winter Garden. Larry lives in the home he built in 1961. Many in the community visited him there this past September to celebrate his 100th birthday. Among the many gems our great city of Winter Garden holds, Mr. Larry Cheever is a hero among us, who we should all cherish.