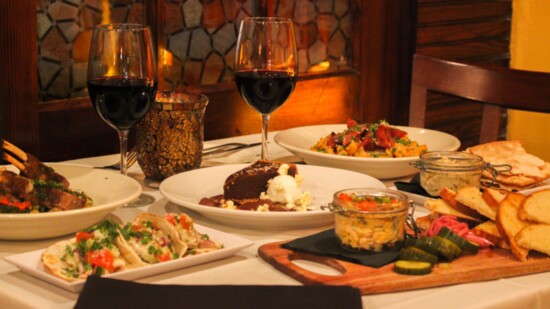 The Chef’s Table and Tasting Room at the Edgewater Hotel

Dreaming of an intimate dining experience where locally sourced ingredients make every course shine? The Chef’s Table at the Edgewater will not only elevate your taste buds, but will treat you to a dining experience sought after by foodies around the world.

Kevin and Laurie Tartar had a dream to open up their own restaurant, with thirty years each in culinary experience. While it may not have been the best time to open a three-course prix fixe fine dining establishment in 2008, they made their dream a reality by opening The Chef’s Table at the Edgewater Hotel located on Plant Street in Downtown Winter Garden. They became an instant success, with magazine and media features just six weeks after opening their doors.

As the restaurant thrived, David Lampman, who had started at The Chef’s Table as a prep chef in 2009, worked his way through the ranks to become the new Chef de Cuisine. David developed his own style, with a focus on seasonal dishes that feature fresh and local ingredients. The Chef’s Table and The Tasting Room have been highly rated by local food critics, media outlets, and were featured in Open Table’s Top 100 Restaurants in America.

A few years after the opening of The Chef’s Table, the florist located in the front room of the building moved and the space became available. Shortly after, The Tasting Room was born, and took over the space. The Tasting Room offered a contrasting experience to The Chefs Table prix fixe menu, with tapas style light bites, a la carte dinners, and craft cocktails. The Tasting Room offers a great gathering space for locals, and is known for classics such as the Mini Beef Wellington Trio, Duck Fat Fries, and Andouille Mac & Cheese.

With new challenges facing the restaurant industry this year, the team at The Chef’s Table took the opportunity to adapt, by supplying the new demand for take away style family meals, adding brunch three days per week, and partnering with Uber Eats for delivery.

The team at The Chef’s Table is always seeking excellence, asking “How can we be better today?” says Laurie. The greatness shines through the quality and creativity of the food they serve each day. It is difficult to find a gem as bright as The Chef’s Table and The Tasting Room, especially under one roof. If you have yet to frequent this establishment, be sure to add them to your next date night out, or celebratory dinner.