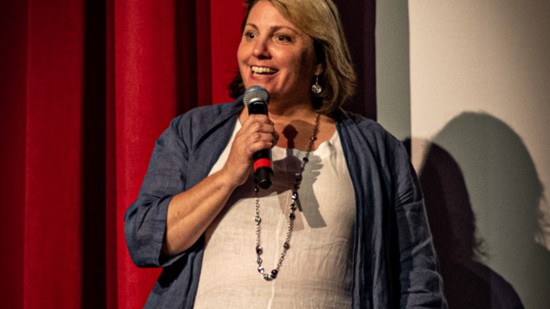 Spotlight Behind the Scenes and on the Stage

The Uptown! Knauer Performing Arts Center (Uptown!) opened its doors in 2017 in the historic West Chester National Guard Armory building on North High Street. The structure, built in 1916 to house the National Guard Bravo Company, became available in 2013 when the National Guard announced it was exploring plans to relocate. After five years of renovating and fundraising, the building was repurposed as a multi-use theater with three performance venues, including a 327-seat main stage and state-of-the-art sound and light systems.

Catherine Friedman, Uptown!'s executive director and a member of Opera tutti, one of its five resident companies, is honored to be part of what is fast becoming the cultural hub for performing arts in West Chester and beyond.

“For me, it’s that cherry on top. On top of all the other great things that have been building up in West Chester over the last 15, 20 years, now we have live performing arts as well. This building could have become a lot of things where the public wasn’t necessarily invited in. It’s been given a new life,” she says.

A not-for-profit, mission-driven organization, Uptown! strives to serve as the civic and cultural hub for the region, ensuring artistic excellence, diverse programming and sustainability. Through its programming and outreach, the theater is a special gathering place in the community and reflects the demographic and cultural diversity of our region.

“We have everything from Pink Floyd to opera here, so truly there’s something for everyone,” Catherine says. “I really want people to find themselves here, be it on the stage or in the audience. This is West Chester’s and Chester County’s home for performing arts, and everyone has a place here.”

After earning a Master of Music degree from Westminster Choir College at Rider University, Catherine pursued a career as an opera singer in New York, garnering supportive roles in performing arts organizations including New York City Opera. In 2003, she and her husband, Ken, moved to West Chester for a job opportunity. After a childhood spent moving internationally with her military family, Catherine soon put down roots and now considers West Chester her “hometown.” Prior to joining Uptown!, she served as the executive director of Friends Association for Care and Protection of Children and worked for several other local social service organizations, including Chester County Department of Community Development and Safe Harbor of Greater West Chester.

Catherine is honored to be part of Uptown! and looks forward to lending her talents to further grow the theater and develop relationships in the community.

“I hear stories every day from community members who remember attending dances and events at the Armory ‘back in the day,’ and I love the idea that we’re creating the next generation who 20 or 30 years from now are going to tell somebody, ‘I did my first performance on the stage here.’ It will be a part of their story of West Chester, their history, their growing.”