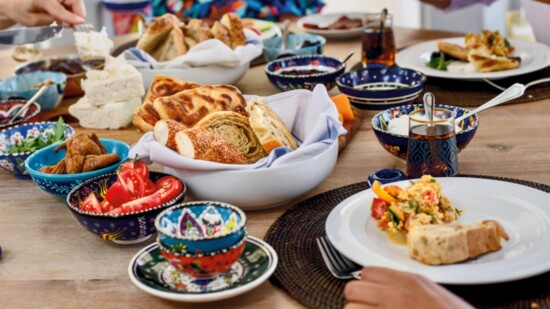 Anyone who has watched the Food Network is familiar with chef Scott Conant. As a longtime judge on the popular competition show “Chopped,” Conant is known for his charming smile, perfectly coiffed hair and outspoken dislike of raw red onions.

But TV is only one of the Scottsdale resident’s claims to fame. Conant made his mark on the food world in 2002 when he debuted the much lauded L’Impero in New York City, which received a James Beard Award for Best New Restaurant in 2003. He followed up that success with the openings of Alto and Scarpetta, both also in Manhattan.

After moving to Scottsdale, the acclaimed restaurateur opened Mora Italian, a modern take on a neighborhood osteria, in Midtown Phoenix in 2017. In 2020, Conant expanded his Arizona empire with The Americano, an Italian-inspired steakhouse, in Scottsdale.

“My style of cooking is European-based,” says the chef who is renowned for his simple pasta dishes that are packed with flavor. One of his most loved is spaghetti al pomodoro — yes, spaghetti with tomato sauce.

Recently, Conant released his fourth cookbook, “Peace, Love, and Pasta,” which is filled with recipes he’s acquired during his 35-year-long career. “It’s a little snapshot into my life of food and how I cook at home for my family,” he explains. Readers will find dishes that Conant cooks for his wife and daughters, a section devoted to his favorite toppings and condiments, and recipes that are close to his heart, including his mother’s Sunday sauce. “I tested every recipe at home,” he adds.

Now you can, too. Try one of Conant’s easy-to-make dishes, such as the one on the following page, and enrich your next holiday meal.

Chef Scott Conant offers his most personal cookbook yet: “Peace, Love, and Pasta: Simple and Elegant Recipes from a Chef’s Home Kitchen (Abrams; September 2021). Focusing on the foods Conant grew up with and the meals he makes for his loved ones today, this collection of recipes compiles simple, fresh and flavorful Italian fare for you to bring to your family’s table. These dishes are built on the art of cooking for love, a fascination with flavors and ingredients, and the simple pleasures of taste and conviviality. Available at all major booksellers. $35

Heat olive oil in a large cast-iron skillet set over medium-high heat. Season chicken with the salt and pepper on both sides and place chicken pieces skin side down in the skillet. Add potatoes, filling pan until the pan’s surface area is completely covered with chicken and potatoes. Cover and cook for 8 to 10 minutes, until chicken has released its juices and everything is golden. Flip chicken, cover again, and cook for another 10 minutes, or until the thickest part of the chicken reaches 165°F. Remove chicken from heat, top with dollops of chimichurri, and serve immediately.

Add all ingredients to a bowl and stir with a fork to combine. The chimichurri is best served immediately while the herbs are still fresh, but it can be stored, covered, in the refrigerator for up to 1 day.