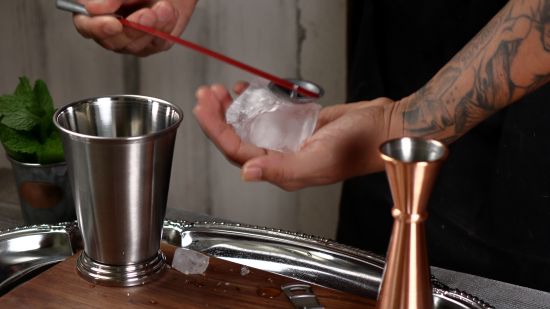 The History of the Mint Julep

While the Mint Julep has become synonymous with the Kentucky Derby, its history is more global. The etymology of the word “julep” has its roots in ancient Persia as gulab (rosewater) or julab in Arabic. Predating the cocktail, it was recognized as a floral medicinal tonic prescribed by physicians. By the eighteenth century, the addition of alcohol was touted. In 1784, John Ferdinand Smyth writes of visiting Virginia where a “julap” was “made of rum, water, and sugar, but very strong.” Jerry Thomas’ Julep recipe in his 1862 guide How To Mix Drinks includes shaved ice, mint, water, pulverized sugar, and cognac. Although now associated with the Derby and bourbon, historian David Wondrich in his book Imbibe points out that the Julep was “primarily a brandy drink and rarely a whiskey one." Likewise, its appeal was not limited to the antebellum South, but widespread in cities such as New York and Chicago. In fact, Wondrich describes how “it was the most popular drink in America from the early nineteenth century until the Civil War”.

In 1938, its popularity resurged when Churchill Downs adopted it as its own, using Kentucky bourbon, naturally, and serving their Julep in souvenir glasses for 75 cents. It wasn’t until 1951 that the glasses were replaced by the silver Julep cups we are familiar with today.

Deft handling of the key elements is important in a well-made Mint Julep. Too much mint is overwhelming, while vigorous muddling makes it bitter. An excess of sugar immediately renders a Mint Julep too syrupy, while a stingy hand with ice will not dilute the whiskey properly. To appreciate this American classic, you'll want your Mint Julep mounded with cracked ice, lightly sweetened, and nicely balanced with whiskey (or other spirit). For the quintessential Derby Day icon, be sure to festoon with a sprig of fresh mint and enjoy in a frosted Julep cup.

Christina Barrueta is an award-winning food writer who has been inducted into the Arizona Culinary Hall of Fame and whose work has been featured in publications such as Phoenix Home and Garden, Time Out, and WhereTraveler. She has been recognized with a Foodist Award for Best Food Writer by the Arizona Restaurant Association and as Most Influential in Valley Food by Arizona...
Read More In My Profile