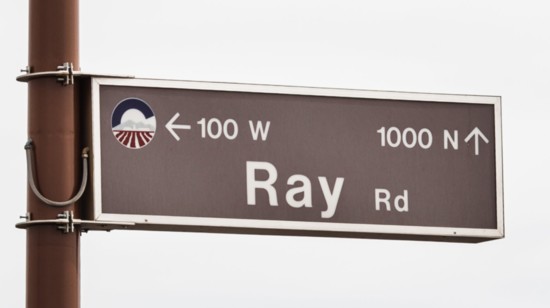 When brothers Peter or Andy Ray meet someone new who is from Chandler, their last name is one of the first talking points. Grandsons of Milton and Gwen Ray—part of the original local family that Ray Road was named for—the two are part of a large family with roots that go back a century to Chandler’s beginnings.

In 2005, Chandler-Gilbert Community College (CGCC) put together a project called “Driving Chandler's Streets: The History of Chandler's Streets as told by CGCC Students.” It provides details on how Milton Ray was born to a farming family in 1910, and moved to Chandler in 1915.

“Their farm was located along Ray Road, between Cooper and Gilbert Roads,” according to CGCC. “They raised hay and cattle. When Milton was 10, his father died, and the whole family had to help bring in money for the family. Eventually, the Ray family moved off the farm and rented various homes. Milton grew up in Chandler, and in 1929, he graduated from Chandler High School.”

According to CGCC, Milton shared memories of his school days.

"There were a lot of horse-drawn buggy races and saddle pony races to and from school, and even at noon hour until they were forbidden. As usual, a few accidents of broken wheels, crippled horses, riders and drivers caused the curtailment. Hitching racks and water troughs were available at school. Each owner went out at noon or recess and watered their horses. ... Many a student walked to school and back home. Later, when a few cement roads were constructed about the area, those close to these roads skated to school. Also when one could afford a bicycle, later, it was ridden to school. All of us who skated to school and had a friend riding a horse along the same paved road, we'd hang on to the horse's tail, thus getting pulled and getting a free ride."

Milton would grow up, marry Gwen, and continue to live in the area and raise a family. Andy and Peter’s father, Mario, was their youngest son. He raised his family—Andy, Peter and brothers Brennan, Tim and Matt—in Chandler as well, but he tragically died in a plane crash in 1990.

All five Ray sons—who have 19 children of their own among them—stayed in the area.

Peter is now a general dentist at Ray Family Dental Care, and Andy is an oral surgeon at Canyon State Oral and Dental Implant Surgery. Brennan, Tim and Matt have found career success in law and entrepreneurship.

“People recognize the name and I always tell the backstory every chance I get,” Andy says.

“I think it helps to show local community members that we just didn’t show up in Chandler yesterday,” Peter adds.

Andy shares how the three eldest Ray brothers went to Chandler High School, the same school their grandpa graduated from in 1929.

“I still live in the same zip code I grew up in,” shares Peter.

While both Ray brothers admit that Chandler has changed since they were children, they note that they love the community’s great schools and weather, and they are active in their local faith community (the Church of Jesus Christ of Latter-Day Saints).

“Having such a history in Chandler gives us a total sense of pride—and my last name is my one claim to fame, so I have to use it!” Andy jokes.

“Knowing our history provides us with a sense of family and helps get us through tough times. My brothers and I all have bolo ties in memory of our grandfather, and we wear them from time to time. Family and ancestry are important parts of who we are as people and our faith.”

Peter adds that their father passing away decades ago affected the family in a big way, so having access to old photographs, history and even items like their grandpa’s high school letters, provides a sense of peace.

“Whenever my patients get lost, I direct them to Ray Road and tell them about my grandfather and great grandfather who had a farm there,” he shares. “We all joke that they sold the farm about 80 years too early, but we have such a rich history that it doesn’t matter.”

“As a local family and local businessmen, we’re proud of our heritage and invested in our community,” says Peter.