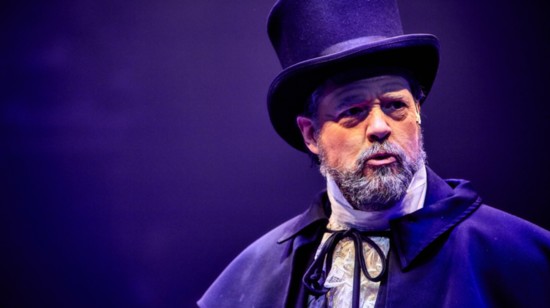 A Christmas Carol at the Hale Centre Theatre

Have you ever walked by the Hale Center Theater and wondered what was happening inside? Is it a movie theater? A comedy club? The '50s-style marquee always intrigued me, but, having moved to Gilbert only a few years ago, I had not really had a chance to investigate yet.

Walking into the theater on a Saturday morning, it felt like going through the doors of the movie theater where I grew up watching matinee movies before the advent of cable television. Carpeted lobby? Check. Ornate frieze? Check. Curved staircase leading to the balcony? Check. What I was not expecting was what I found on the other side of the spacious entrance.

You see, Hale Center is a theater-in-the-round, a center-stage theater where the audience sits around the stage, the actors just a few feet away from them. Immediately, I was struck by visions of the actors standing center-stage playing to an audience all around. This must be quite an intimate and immersing experience.

Quite an experience, especially considering that I am here to meet the principal characters of a magical Christmas classic set in Victorian London, full of atmospheric effects, ghosts, rattling chains and a large cast of characters. That was the first thing that came to mind. The second was: “How?”

As it turns out, it takes quite a lot of passion, two full casts one lead by Rob Stuart and the other led by Cory McCloskey both playing the iconic grouch Ebenezer Scrooge, an amazing support team of scenic designers and wardrobe specialists bring the character from the page to the stage.

Each year since the opening of the center in 2003, Director David Dietlein has brought A Christmas Carol to Gilbert. Each year, nearly 60 to 70% of the cast members come back to reprise their roles. From Thanksgiving to Christmas Eve, some 54 representations, Rob and Cory take turns dazzling their audience for two hours.

For both actors, portraying Scrooge is a labor of passion, each returning to the character from previous seasons. It is the second time Rob will take to the stage as Scrooge and the fifth season for Cory, who sees playing the character as a treat.

According to Rob, without the respite provided by the second cast, it would be impossible to survive the season. Each cast rehearses to hit their mark the same way just in case they must step in for another cast member in the same role.

With a short six weeks of rehearsals—only three on the actual stage—this is critical since you never know what can happen from one representation to the next. This is live theater, after all, as Rob can attest. He had to step in for Cory after the actor tore a ligament on one of the days he was scheduled to perform.

Nevertheless, you can tell each of them loves the challenge of this role.

“As an actor, to play this character is a privilege. There is so much to explore and enjoy.  I just love to let myself go, and it can be draining. … especially when Scrooge witnesses the loss of his true love … I find myself often weeping at the end of the scene,” Cory says.

For Rob, the challenge is to accurately convey the deeper message that made A Christmas Carol such a holiday classic.

“What I hope is that, at the end of the show, they see the journey that Scrooge takes—his change in perspective as he learns to appreciate the wonderful things in life instead of the money and the power that he focused on for how many decades before that and came to see what the Christmas season stands for … family, friends, the giving and the love.”

There is something magical here. That something that we used to experience when enjoying a matinee or going to the movies on a date.  Something that large-screen TVs and home theaters have taken away from us.

Like Scrooge, it is something that we must experience firsthand in order to remember what we had.

A Christmas Carol is presented at the Hale Center Theater from Nov. 29 to Dec. 24. Produced by David Dietlein with music from Lincoln Wright and choreography from Cambrian James. HaleTheatreArizona.com