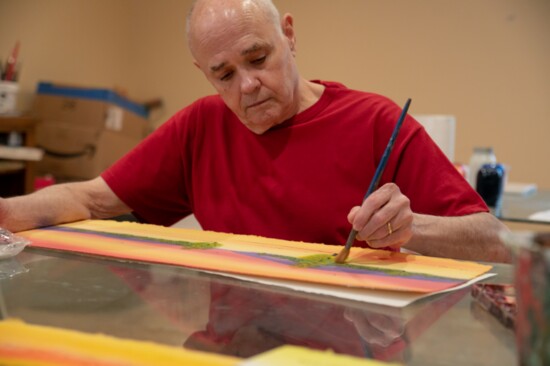 Dr. Baxter Perkinson is known for his accomplishments in art and dentistry, as well as for his local philanthropy

In the dictionary, next to the entry for “prolific,” there should be a picture of Baxter Perkinson, Jr., D.D.S.

Dr. Perkinson, who has enjoyed notable careers in both dentistry and art, admits to sometimes creating 10 paintings a day, 100 a week, and so many over 42+ years as a watercolorist that his attempt to estimate a total – 10,000 – is surely understated.

His talent and productivity are even more amazing considering he never had the slightest interest in art until he married and his wife, who has loved art all her life, dragged him to a painting class.

“It was her turn,” he grinned, noting that he and Elaine alternate in choosing shared activities. “I picked disco dancing. She picked an art class.”

That class, taught by local artist Ellie Cox, in her garage around a Ping-Pong table, changed Dr. Perkinson’s life.

“Bless his heart, it was 10 ladies and Baxter,” Elaine, herself a sculptor, laughed, recalling the 10-week class that launched her husband’s art career and ultimately led to the founding of a new arts center that bears the Perkinson name.

“I was the only one without art experience,” Dr. Perkinson said. So he sat by himself and took in the instruction. He quickly realized the eye-hand coordination crucial to dentistry lent itself to painting, and discovered an “instant connection” with art. He practiced with intensity: “In those 10 weeks, I probably did a year’s worth of painting.” Ellie Cox’s husband, Gene, became Dr. Perkinson’s framer.

From then on, 10 years after graduating from VCU’s dental school in 1970 and opening his first practice at 25, Dr. Perkinson combined dentistry and art.

“If you can take a hunk of plastic and make it look like a tooth, you have artistic ability,” Elaine said. Dr. Perkinson echoed that thought: “There’s something innate about it for me.”

A tour of the Perkinsons’ elegant four-level Richmond home, set on seven sculpted acres featuring a portion of Pittaway Creek and a picture-perfect view of the James River, is evidence of the good doctor’s artistic proclivity. Every bit of wall space contains framed Perkinson art, including hallways and stairwells; Elaine’s sculptures also are on display. Additionally, the couple exhibit original work by other Virginia painters and sculptors. It’s like living in a museum, which is just the effect the Perkinsons, who visit art museums wherever they travel, wanted. “If the house burned down, I wouldn’t care about the house,” Dr. Perkinson said. “It’s the art. It’s irreplaceable.”

He works in a roomy, sunny basement studio, outfitted with two large glass-topped trestle tables, an old sofa, and shelves brimming with art books (“I read every page of every one of them”). Sometimes standing, sometimes perched on a paint-stained stool reminiscent of the kind dentists use, he works quickly, making sweeping strokes with a 3-inch brush. While in his early days he sometimes started from a sketch or photograph (as for paintings of a bridge and a city neighborhood) now he goes “straight to canvas,” focusing first on light/dark contrast and then adding color. “I just start painting, and then I see where it takes me.”

French Impressionism is his favorite style, and even a casual observer sees that influence in his landscapes and abstracts. He went through a black-and-white phase after viewing an Ansel Adams exhibit, and studying photography taught him composition. He’s also done watercolor collage (painting bits of paper and then assembling them) and has painted on glass, pressing it against white paper to finish the piece.

His newest passion, poured acrylic abstracts, came after he retired from dentistry five years ago, at 72. He felt uncharacteristically bored, and friends suggested a new medium. He briefly considered oil, working with Richmond artist Ed Hatch, but noted, “You can spend weeks doing one oil painting; that’s not me.” He stumbled on acrylics and a much better fit: “It dries overnight, sometimes while you’re still painting. It lends itself to a fast painter.”

For all his productivity, Dr. Perkinson has never sold a painting. Instead he gives them away or donates them to local charities, which auction them off, the largest going for as much as $10,000. One such recipient, Trinity Episcopal School, in his neighborhood, has an arts center funded by and named for the Perkinsons.

Born poor – he grew up in a four-room house and slept with three brothers in a bunkbed room so tiny they had to get in and out of bed one at a time – sharing his bounty is a priority. He donated $2.5 million to VCU’s new school of dentistry, which bears his name. “I lot of my time is spent supporting VCU,” said Dr. Perkinson, who served three terms on the school’s board of visitors. So when former VCU President Gene Trani’s assistant, Sue Anne (Sam) Messmer, called him with news of an effort to build an arts center in Chesterfield County, he quickly jumped on board.

“It felt like coming home. Chester is like a second home to me,” he said, noting his parents grew up in nearby Matoaca and Colonial Heights, and his dental office there. “It made sense that if I was going to invest in a community, that was the place to do it.” He threw himself into efforts to build the Baxter Perkinson Center for the Arts & Education, which opened in 2021 and displays his and Elaine’s art.

“Dr. Perkinson’s love and passion for the arts is infectious!” said Chelsea Buyalos, the center’s executive director. “We are so grateful for his generosity as we lay the foundation for the Perkinson Center to serve our community for generations to come.”

While he’s clearly appreciative of public accolades for his artistic accomplishments, he basks when acknowledged for his contributions to his industry. Four years ago, he was inducted into the Junior Achievement Greater Richmond Business Hall of Fame, noting, “It’s a point of pride to be recognized as a businessman.”

It’s especially notable because dentistry, when Dr. Perkinson started, was not typically run in true business fashion. “It used to be ‘mom and pop,’ with the dentist handling patients and his wife, the receptionist,” he recalled. Dr. Perkinson channeled early retail work experience at Sears to break that mold, hiring hygienists and office staff and delegating duties. He also advertised – unusual for dentistry at the time.

And he opened branch offices. After his first in Bon Air in 1974, came Chester four years later, an office in the West End, and so on, at four- to five-year intervals. Now, Dr. Perkinson’s Virginia Family Dentistry operates 15 locations across Richmond and in surrounding Colonial Heights and Powhatan and New Kent counties.

And before you ask: Yes, Perkinson originals hang in Virginia Family Dentistry offices, making a pleasant environment for sometimes-apprehensive patients. His work also is reproduced on calendars given to patients. Some newer offices display prints.

His pride extends to his family’s accomplishments as he talks enthusiastically about Elaine’s sculpture, and like any parent, boasts about his kids - three dentists, one nurse practitioner – who also are musicians and photographers. Among nine grandchildren, several exhibit artistic tendencies, with one bound for the Appomatox School for Music and Art.

Even in retirement, he’s busy. He looks younger and exudes more energy and spark than your typical 77-year-old. How did he do it, and how does he keep up the pace? “I took it one day at a time,” he said. “I was born with an ungodly amount of motivation. It’s not so much that I want to make a difference. I just want to be busy. If I’m awake, I want to be doing something.”

How does he want to be remembered? “That I took advantage of my education, that I transferred that to other people, and I made good use of my time.”

Perkinson Center for the Arts and Education