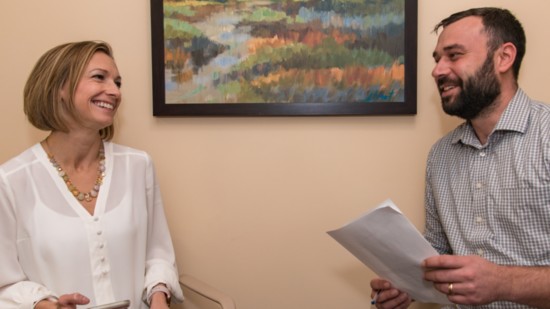 A new business referral network is spreading through Midlothian, and what’s different about it is just a matter of degree.

“I chose ‘Two Twelve’ because there’s only one degree of difference between 211 degrees, which is hot water, and 212 degrees, when water boils to create steam,” said Andy Fulghum, founder and president of the Two Twelve Referral Network. “Steam drives locomotives. It drives industry. Two Twelve is all about that ‘extra degree.’ Everything we do has that extra focus.”

Visit a Two Twelve team, and the difference is apparent. Every meeting begins with a reminder that only “permission-based referrals” are passed – not leads. Specifically, the person being referred is expecting a call, and the one calling has been highly recommended as a “quality resource.” In other words – there’s no cold-calling in the Two Twelve world.

Most striking, though, is the “gratitude incentive” or “GI.” Fulghum, of Midlothian, believes gratitude has been conspicuously absent in business for many years, so he built Two Twelve on a platform of thankfulness. A member who brings in another member receives a thank-you letter and $100, a corporate “gratitude incentive” for helping to grow the network. Bringing in three new members in one month carries an additional corporate bonus that covers the referring member’s annual dues to the network.

Sounds simple - but it’s different enough from other networks that in the five years since Two Twelve began, membership has exploded to around 50 teams and more than 600 members. A dozen teams are active in and around Midlothian and Bon Air alone, and teams also exist throughout Greater Richmond as well as statewide.

Members rave about the organization.

“Two Twelve has brought me a considerable amount of business,” said Jenn Hart, a real estate agent and chair of River City Resources, a team meeting at Einstein’s Bagels near Hart’s Robious corridor home. “I helped one of my teammates buy his first house in Midlothian. The next thing I know, he referred me to his aunt, and I helped her buy a house in Colonial Heights. Then the same team member referred me to another aunt, and I listed and sold her family estate in Chester. It’s been a family affair!”

Steve Feher, vice president of The Ridgefield Group, an IT consulting service, was new to Midlothian when he joined a Two Twelve group meeting at Spring Arbor Memory Care in Salisbury. In addition to attending his team’s meetings, Feher frequently visits other teams – a practice Fulghum encourages. “Visiting one team soon after I got here led to thousands of dollars in closed business. None of these opportunities were publicly known … they were all referrals I had zero relationship with. I could not possibly have won these opportunities without Two Twelve.”

But it’s the focus on gratitude that sets Two Twelve apart.

“People who join this network notice something immediately,” Feher said. “While we’re serious about business and definitely seek financial success, we know that building a business means being prepared to give first.”

Hart agreed. “The Two Twelve ‘GI’ incentive appeals to my spirit of giving. Gratitude incentives I’ve given and received this year range from gift certificates to local businesses to custom jewelry. It’s always fun to receive one … and who doesn’t like to feel appreciated?”

Fulghum attributes Two Twelve’s success to its focus on fundamentals. “We believe in gratitude for our relationships and opportunities, respect for our associates, ethical conduct in our business dealings, dedication to the highest levels of service, and professionalism in our trades,” he said. “At Two Twelve, we are laser-focused on helping one another succeed.”