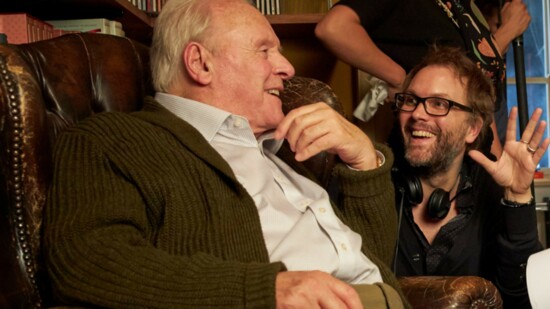 5 STAR REVIEW of THE FATHER

As none of us are escaping our own evolution toward the twilight years--whether we want to face this realization or not--we hope and pray that dementia won’t creep in, robbing us of the life we once knew. Welcome to the heart-wrenching premise behind director and writer Florian Zeller’s latest creation:  The Father.

As we meet Anthony (Anthony Hopkins), he’s struggling to understand why his daughter Anne (Olivia Colman) is always hovering, as he's perfectly fine, living alone in his exquisite flat in the heart of London.

Torn on what to do, because her father’s mental state seems to be diminishing quickly over a few months, Anne attempts to bring in an aide to assist her father with his daily routine. Enamored initially by his new aide Laura (Imogen Poots), Anthony seems to be pleased with having a fresh face with whom to converse. But just as quickly as his excitement for this new arrangement began, it meets with its demise. Anthony is sure that Anne and Laura both have ulterior motives, and just want to get rid of him.

As Anne struggles with what's the best thing to do for her father and his safety in his present state of mind, she, too, comes to the realization that neither she, nor her father, are equipped to face all the uncertainties that lie ahead.

Mentally captivating throughout, Florian brings this very painful scenario of real life to a pinnacle in moviemaking, as viewers find themselves as confused as the characters on screen--as to what is real--or what's actually happening in the dementia-filled mind of The Father.

This film literally draws you into the insanity of dementia, and how it starts to rob elderly of any sense of reality, forcing them to live in a constant state of confusion, with no means of escape. Brilliantly acted by Academy award winner Anthony Hopkins, whose performance definitely warrants all the accolades it received throughout this year's awards season. Olivia Colman also gives an exceptional performance within her role as the daughter, who painfully must decide what's the best course of action to care for her father, as best she can. When you add in the wonderful performances by Imogen Poots and Mark Gatiss as well, The Father becomes one of the most exceptional films of the year, totally warranting taking the time to view it on streaming services immediately.