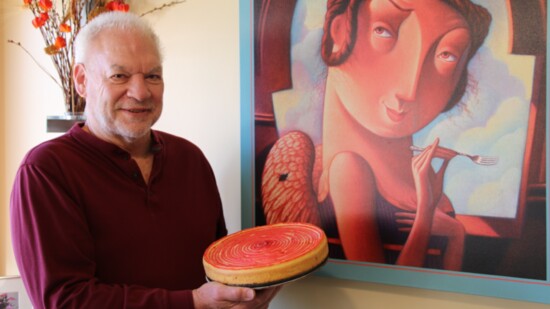 With the holidays upon us, DINNER & A MOVIE = DATE NIGHT decided to switch things up this month to highlight a fabulous place at which to indulge your sweet tooth, while watching a fabulous, award-winning and Tony nominated Broadway play brought to the big and small screens by Netflix.

Let’s start by ordering a cheesecake, or one of other delectable desserts to enjoy from this St. Louis gem of a place, located just one block south of the intersection of Clayton Road and S. Big Bend Blvd.

This locally owned shop has been creating the most scrumptious cheesecakes and other desserts since 1987, when Hank first opened his doors in October of that year. Since then, Hank’s Cheesecakes has brought smiles to the faces of families throughout St. Louis, offering 35-plus different cheesecake options, along with carrot cake, an indulgent rich chocolate cake, and a few other creations that will satisfy even the most finicky palates.

Hank’s also features sugar-free and gluten-free options, along with appetizer size portions. Hank’s is known for their most exquisite, up to six-tier wedding cakes, allowing for family and friends to partake of their incredible cheesecakes, too. They also make fabulous corporate gifts. Hank, and his team of super-talented bakers, have been focusing on creating “the best cheesecakes created this side of heaven” for a very long time now, so order one or more of their fabulous creations by phone, or visit their website at HanksCheesecakes.com, and get ready to experience a little slice of heaven of your very own!

Now that you’ve ordered dessert, picked up or had your scrumptious delectables delivered to enjoy before or after the movie, get ready to experience an incredible straight from Broadway musical, directed by Ryan Murphy (American Horror Story, Ratched), and featuring an all-star cast, including Meryl Streep, James Corden, Nicole Kidman and Keegan-Michael Key, just to name a few.

As Broadway stars Dee Dee Allen (Meryl Streep) and Barry Glickman (James Corden) head back to the stage, it seems their latest expensive show on Broadway is a big ol' flop, threatening to flatline both of their careers. Meanwhile, in a small town in Indiana, high school student Emma Nolan (Jo Ellen Pellman) is about to experience her first broken heart. As head of the PTA (Kerry Washington) has decided to ban Emma from attending her prom, as she isn’t allowing her to attend with her girlfriend Alyssa (Arianna DeBose), if she can help it. But when Dee Dee and Barry get wind of the predicament Emma’s in, they decide this is the perfect cause to get behind, as it could help to resurrect both of their careers. So they hit the road with fellow stage actors, Angie (Nicole Kidman) and Trent (Andrew Rannells) in tow, as they both also need a little lift for their careers, too. But when all this flagrant, self-absorbed activism begins to backfire, they find themselves still wanting to rally behind Emma, to give her the night she truly deserves, in celebrating who she really is.