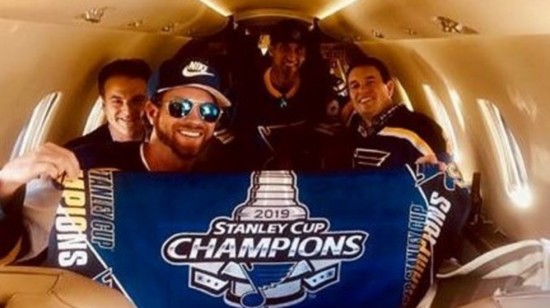 What Happens When Sports Fans Keep the Faith

One local hockey fan has a good luck 7-month-old pup, Gracie. She's certainly proven her worth with the against-the-odds prosperous fortune she's brought him!

Scott Berry bet "with his heart, not his mind" on Jan. 15 regarding the National Hockey League season while he was in Las Vegas. He put $400 down on the St. Louis Blues hockey team for winning this year's Stanley Cup championship. At the time of his bet, the Blues had the worst record in the league and were given 250-1 odds. People snickered at him. Nobody's laughing now that his long-shot bet paid out $100,000!

The 31-year-old could've guaranteed himself some sort of profit by selling his betting ticket and also wagering on the Boston Bruins to win it all. Instead, he refused to hedge because he says he wanted to stick with the Blues.

He got Gracie the day after he bought that ticket and considers her part of this blessing.

"The ticket itself had a journey, going from my sock drawer so Gracie wouldn't chew it up, to eventually my safe, to lastly a safety deposit box once I realized how valuable it was becoming," explains Scott, who is a Parkway West High School graduate who now lives in Brentwood.

To collect his winnings, Scott flew on a private jet to Vegas. He took the payout in a check, rather than chips. He wore the NHL’s limited-edition championship belt on the trip, but what he remembers most is believing that if he sold the ticket or even hedged on the Bruins, he would ruin all the momentum.

"I'm very superstitious and a die-hard Blues fan," he admits.

He says he got kicks from hearing about people in various cities, including New York City, San Diego and Chicago, talking in offices about whether each other had heard about "the guy with $100,000 on the line" and whether he would sell or ride out the situation.

"This team, this city, these fans deserved the Stanley Cup way more than I deserve $12,000, $40,000 or $100,000. I wasn't about to do anything to misguide it," Scott says. "Sometimes in life, you just have to go with instinct and unwavering faith and let the big guy up above decide what happens!"

Since collecting his winnings, Scott says he returned to work. "I just went to a conference in Orlando, and prospective clients walked up to our booth and asked for pictures with 'the $100,000 Blues guy.' It's been truly surreal."

The first thing Scott bought with his winnings was a night out with friends. Then he did a giant barbecue for his dad on Father's Day. Then he had to pay off his Stub Hub credit card, as he was racking up more expenses post-season.

"I plan to donate to the Blues for Kids charity," says Scott, who recommends counting blessings every day and always giving back some to help others.

He says he's so proud of St. Louis. "It feels so good to have something we can collectively father around and celebrate. It's much, much broader than just sports and a championship," he adds.

Kudos to Gracie for her part, as she must've been channeling the positive vibes from Barclay, this year's Blues therapy dog in training.