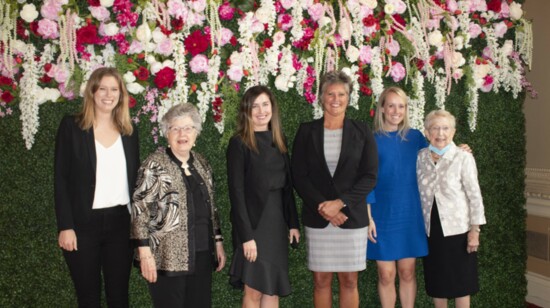 Since Angie joined the MAC in 2015 after moving back to St. Louis from New York City, she's served on numerous committees, including planning and membership. She chaired its Women’s Initiative Group for several years, and served as a member of its board of governors.

"After returning to St. Louis, I was looking to network with other like-minded professionals. I not only found those opportunities instantly at the MAC, I also found amazing leadership opportunities that have allowed me to grow both professionally and personally," Angie recalls.

The MAC's 300 staffers refer to the club as the premier athletic, social and dining club for about 2,500 metro area business, professional and civic leaders and their families. To become a member, one must be invited by a current member and approved by the board of governors. Family membership includes access to the MAC’s clubhouses in West St. Louis County and downtown St. Louis.

Angie says women have been leading within the club for years. Additionally, since 2011, the Missouri Athletic Club has annually honored six local women who've been revolutionary in business, civic engagement, philanthropic programs and mentorship at the Women of Distinction Luncheon. Honorees demonstrate excellence, growth, grit and empathy. Each year, the MAC also honors one Rising Star, someone 35 years of age or younger, who's leading the next generation of professional women to new heights.

Just ask Angie why other women should join the MAC. "Some join for professional reasons, while others join for family reasons. If you're looking for a wonderful community, a supportive group of lifelong friends and a fun place to spend your time, join the MAC. I've met some of my best friends through the MAC. I'm so incredibly grateful I joined the Club and so thankful for my MAC family," she says.

This University City resident characterizes being president as being the MAC’s emissary. "We're a members' club. Understanding our members' wants and needs, and being an ambassador for our members--both within the Club and within the community--will be my primary focus," she adds.

Angie says her vision for the MAC is to continue advancing to meet members' needs, based on changes due to the pandemic, while broadening the member base. "I'll focus on finding new services, as well as better ways, to connect with members. I'll be leading a brand architecture and strategy project, which will help us do just that."

Another of Angie's focal points will be the financial condition of the Club. "We have a 10-year capital plan that outlines our projected investments in our Club, including facilities upgrades, new features and facilities as well as equipment. We have three options that we'll look at in the next year, predicated on our financial position remaining strong and our outlook remaining positive," she adds.

Every year, Angie says she creates a new mantra. Her mantra for 2021? “Be Uncomfortable." She says she believes it's impossible to grow as a person without getting out of one's own comfort zone.

Additionally, her favorite quote comes from Coco Chanel:  “In order to be irreplaceable, one must always be different!”

The MAC opened its doors on Sept. 13, 1903, as St. Louis was preparing for the 1904 Olympics and World's Fair. The Club has achieved Platinum Club status every year since 2000, a designation only bestowed on the top 20 private athletic clubs across the United States.

“In order to be irreplaceable, one must always be different!” ~Gabrielle Bonheur "Coco" Chanel