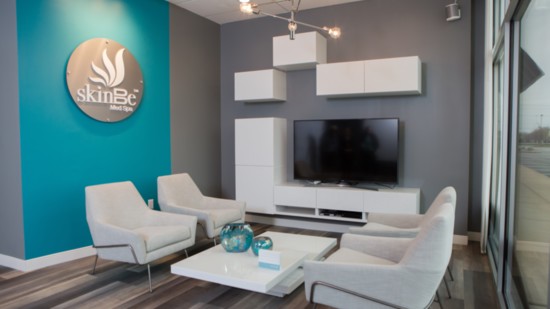 Men Put Skin in the Game

Men are tapping into noninvasive health and cosmetic treatments in record numbers. Beth Donaldson, founder and CEO of skinBe Med Spa in Chesterfield, stands completely ready with her team to assist astute guys through her state-of-the-art dripBar health supplementations.

IV nutritional therapy, as offered at skinBe, is considered an effective and efficient replenishing treatment by health care advocates, primarily because the method bypasses the digestive system, allowing for up to 100% absorption, Beth says.

"All skinBe services are great for men; in fact, aesthetic service sales in men have increased by more than 500% in the last five years, as it becomes more socially acceptable for men to get services done, such as 'Brotox,' filler and micro-needling," Beth says.

She assures men can consult with one of skinBe's master nurse injectors about personal goals before receiving a select cocktail drip with customized booster.

"Our male clientele loves the energy, mental clarity and performance, including physical and sexual aspects, they get from treatments."

Studies show the amino acid L-Arginine, found in many of skinBe's base cocktail drips and available as a booster to customize any drip, can help with sexual performance in men, Beth says.

"It's like a natural Viagra without the embarrassment of picking up your prescription at the pharmacy."

More men are getting Botox/Brotox treatments to help fight fine lines and wrinkles, as well as facial dermal filler for areas that have lost collagen.

"Whether they like to talk about it with family and friends or not, they're doing it! skinBe is the place where they feel comfortable receiving treatments, and they know their secret is safe," Beth attests.

"I do stuff," admits Victor Faust, anchor-reporter of the FOX 2 news team, who encourages other men to also "do their thing" for the health of their skin and overall physicality.

Although Vic was accustomed to applying makeup for TV lighting, he says he's only recently begun receiving three or four wrinkle-plumping treatments a year.

"I've learned certain lines that develop in the face can make people look angry, even when we aren't. And I didn't want that, especially not when I'm on TV and I'm actually happy and friendly in reality," he says.

Regarding makeup, Vic guarantees "less is more," so he believes taking steps to supplement his face's natural features is definitely a great option. He equates it to having some "sizzle" to go with the "sustenance."

"My boys make fun of me for getting facials, and there are some stigmas that come with men taking better care of themselves. But, men also get wrinkles as they age, and I think it's good to give these health therapies a shot," Vic says.

"These treatments and products simply weren't an option for men in the past, because we didn't even know they existed," he says.

Coming from an athletic and team-dominated background, Jahidi says men who used to be interested in cosmetics and primping products were called "pretty boys."

"Now, we're all being that guy," he chuckles.

Beth says skinBe professionals also are able to help stimulate hair follicles for anyone who suffers from hair loss with their PRP treatment.

"Nutrition and hydration can play a key role in hair, skin and nail health. Oftentimes, we combine this with a skinBe cocktail drip loaded with nutrients and extra biotin to achieve optimal hair growth and results."

Men want no downtime, in-and-out options and amazing results so they can get back to their busy schedules and don't need to tell their buddies they are going to the med spa, Beth says.

"Not only do we offer options that require no downtime, but we also deliver advanced techniques to get optimal results. More than ever, men are understanding the value of skincare. Skincare is the foundation of everything anti-aging; without it, everything else would be a waste," Beth says.

Men taking steps in this healthy spa arena is simply about feeling the best they can feel, from the inside out!