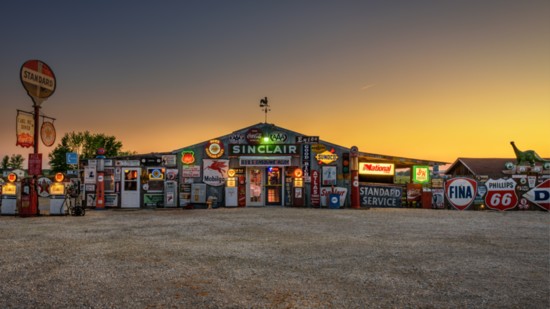 Take the Fast Lane to Route 66

Depending on how long of a road trip one wants to take, the Route 66 Mother Road can provide all that’s needed for 66 minutes, 66 hours or 66 days.

U.S. Route 66 was established on Nov. 11, 1926, with road signs erected the following year. This mystical gateway road connecting Lake Michigan to the Pacific Coast was in danger of being forgotten in the late 20th century as superhighways in each state replaced its main artery. However, there’s been a more recent resurgence of interest in “the Main Street of America” as business owners, preservationists, historians and travelers saved and supported some of the route’s most famous landmarks.

An excellent first step for getting in the mood for such a nostalgic drive is a spellbinding stop at St. Charles-based Fast Lane Classic Cars.

“In the last three weeks, we’ve had visitors from Finland, Italy and Greece. And we just shipped a 1969 Mustang to Malta in Greece,” he says. “Just like what the popularity of the Autobahn is to Americans, which makes us want to go there and drive it, that’s what Route 66 is, as an iconic U.S. landmark, to those who live overseas.”

Dan says they’ve shipped vintage cars to other locations, such as Switzerland and the United Kingdom.

Not bad for a business that started 25 years ago with owner David Williams desiring to sell one car for a friend. Now, Fast Lane Classic Cars sells 400 vehicles per year and is a $20 million operation. Dan says they just completed their fifth building and third showroom.

While there are plenty of interesting Route 66 destinations on which to set exploration sights, one nearby location in Wildwood often gets overlooked regarding its historical relevance. Located on Route 66 since 1929, the Big Chief Roadhouse restaurant building reflects a lively past, amid associations with oil barons, baseball's Babe Ruth and mobsters like Al Capone. In its heyday, Big Chief was one of Missouri's largest tourist cottage courts.

Big Chief Roadhouse co-owner Stephanie Wilson Mulholland says they renovated and reopened in 2012, with new menu items, two full bars, a dog-friendly covered patio, a game room and a private banquet room. They also have six inside and seven outside TVs for sports fans. A Native American decor is woven throughout the restaurant.

Another interesting Route 66 destination is the Elbow Inn Bar & BBQ Pit, located at Devils Elbow, Missouri. Rumor has it that their barbecue is still cooked in a 1930s smoker.

Devils Elbow is an unincorporated community in Pulaski County on U.S. Highway 66. It’s situated on the Big Piney River and is named for a particularly bad place in the river known as a "devil of an elbow.”

While there, one can take in other local activities at Devils Elbow Bridge or a nearby fudge factory. Visitors also can go canoeing, camping, kayaking, scuba diving or shooting. There also are area military monuments, statutes and conservation areas to see. The U.S. Army Engineer Museum is about 7.5 miles away in Fort Leonard Wood. Waynesville, Missouri, has the Route 66 Candy Shoppe, the Old Stagecoach Stop Museum, the historic Talbot House and Pulaski County Courthouse Museum.

For days during which one is craving butterscotch malts and horseshoe sandwiches, drive straight to Bourbon, Missouri, and pull up to Circle Inn Malt Shop. It’s the type of “greasy spoon diner,” operated by the third generation of the family who built it in 1955, that immediately takes patrons back in time, complete with soft-serve ice cream. The Circle Inn has Route 66 memorabilia and historic photographs on the walls and is currently is being renovated.

Ready to Get Your Kicks on Route 66?

Following is a list of Missouri-based, Route 66-related diners to explore, including their city locations: