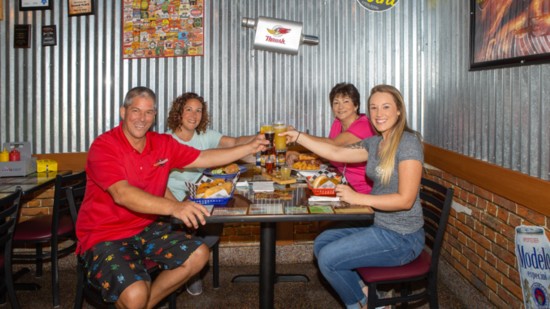 After all, bacon plays a big role in Brewburgers’ "fantastically huge" half-pound (or more) burgers like the Split Decision, a classic one-third-pound bacon and American cheeseburger topped with a blackened chicken breast and melted pepper jack cheese on a brioche roll.

A funny, vibrant guy, Michael livens up neighborhood events in his bacon-themed clothing, including his famous bacon suit.

“My wife, Liz, and I and another couple started Brewburgers in an old Waffle House by the interstate in February 2011,” Michael says. “Brewburgers was such a different turn for me because I had left a lifetime in the restaurant business up in Vermont when this opportunity came about. To tell the truth, I didn’t expect the business to do that much at first.”

His expectations were completely flipped by Brewburgers.

“We were busy right away,” Michael says and grins. “We had the right food, the right concept, the right service, and everything just clicked. I knew right away that we could do a ton of business. The other couple was retiring, and my wife and I bought them out. We bought that first building, upgraded it, repaved the parking lot, added outside seating. Our menu at that time was very simple; we had five or six burgers and a handful of sandwiches that we really focused on doing right. But now? Brewburgers has grown so far, far beyond that.”

Just reading the Brewburgers’ menu is enough to make any mouth water. The burgers come in two tiers, the "favorites" and the "fantastically huge." The "favorites" include burgers like the Ollie G., topped with bacon, garlic and herb cheese, spicy olive tapenade, and chipotle ranch, and the BuffaPalooza Burger, drenched in buffalo sauce with grilled onions and blue cheese. The "fantastically huge" burgers include the Manny Mo, stuffed with cheddar cheese and topped with jalapenos, avocado and nacho cheese sauce on a brioche roll, and the Backyard BBQ, topped with barbecue pulled pork, coleslaw and an onion ring on a pretzel roll. A diverse and delicious array of salads and other sandwiches is also made fresh at the two Brewburgers locations, which both have a variety of craft beers on tap.

“Our chili has been a huge success,” Michael says. “We’ve won the Suncoast BBQ Bash Voters’ Choice award five the of the past six years. We get creative with our burgers, and I name a lot of them after my family. The Ollie G. is named after my youngest son, and one of our gigantic burgers, the Maddy B., is named after my eldest daughter. It’s our most popular giant burger. It’s got two grilled cheese sandwiches on a giant bacon cheeseburger with sauce all over it.”

Michael and Liz have four children, Madison, 21, Andrew, 20, Lily 7, and Oliver, 4. Michael tries to write creative burger recipes to name after all of his kids and other friends and family.

The success of his first location led to the opening of his second location on the Trail, with a cozy, hole-in-the-wall, everybody-knows-your name kind of feel.

“Brewburgers has been the biggest success of my career,” Michael says. “It feels really good. Both restaurants are busy, and we are doing a ton of catering. We try to give back to the community as much as possible and we feel that we are part of a real hometown.”

Brewburgers cooks at events around town, including festivals and at Venice High School football games, in its signature food trailer. Brewburgers always sells out.

“Brewburgers tagline is that we are a family-friendly pub,” Michael says. “We like to keep everything lighthearted. We have fun with menu items, we have fun with décor, we have fun with beer selections. We have 16 different beers at our Trail location and 14 at the other store. We always try to mix everything up, make everyone feel welcome and provide great service.”

Brewburgers is about neighborhood and making people feel like family.

“All money we make at the football games, we give right back to the high school,” Michael says. “We are making great food, we are making people feel at home and we are making a greater community. If you come to Brewburgers and try one of our burgers, you’re definitely going to come back.” 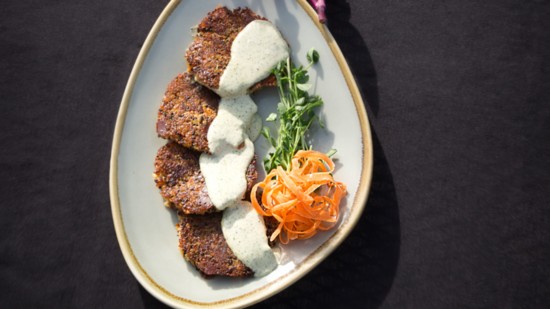 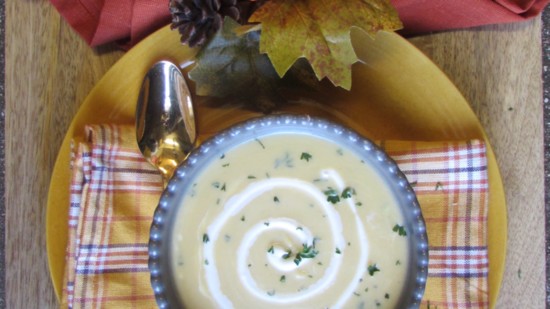