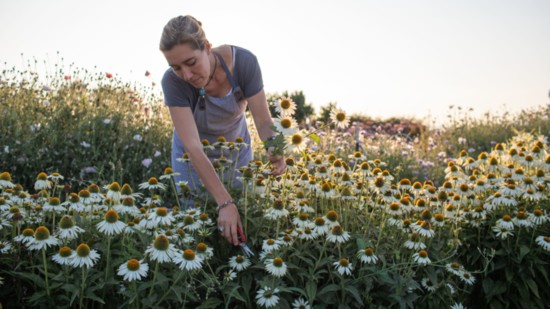 Erin Benzakein Brings the Creation, Art and Connection of Flowers to a New Level

Side pull: Erin Benzakein, founder of Floret and author of the award-winning book, Floret Farm’s Cut Flower Garden, in her flower garden.

Erin Benzakein, founder of Floret and author of the award-winning book, Floret Farm’s Cut Flower Garden, learned her love for flowers during her summer visits to “grammy’s” country home. There she was given the name, “little flower girl” and was in charge of creating all of the nightstand bouquets. In 2001 she and her family decided to leave the City of Seattle behind and pursue their passion of a more intentional life, where they could connect with nature daily in Washington's Skagit Valley.

There, with an overflowing garden, she started creating bouquets for friends and neighbors. Soon the word got out, and people she didn't even know asked if they could order her creations. She loved the joy, emotion and connection giving flowers created, even for two strangers and felt she found her calling.

Benzakein says, “I began experimenting with ingredients that grew in my own garden, but that were not typically thought of as bouquet material, such as herbs, vegetables, and fruit on the branch. My arrangements celebrated the best of what was in season and each bouquet captured a fleeting moment in time.”

She starts every bouquet or art piece with a stroll through her large fields of rare flowers, including many she and her team have engineered and sourced, and gathers those that bloom and materials that grab her attention. When asked how she would describe her design aesthetic, she says, "I aim to mimic the way flowers grow in nature to show off their inherent traits.” Benzakein loves to create with vibrant, unique flowers but her favorite flowers are sweet peas, Iceland poppies and dahlias.

After creating pieces unlike anything anyone had ever seen, she realized that many people wanted to learn how to create pieces as well. She began to share with the world through her blog, workshops and her first book, Floret Farm’s Cut Flower Garden.

Benzakein, considered one of the nation's leading “farmer-florists," runs Floret, a flower farm specializing in growing unique, uncommon and heirloom flowers with her family. Over a few years, with only the help of her husband and kids, the small garden she had planted for her family grew into a bustling two-acre farm and design studio that supplies hundreds of thousands of flowers to markets, CSAs and events. They now host three-day, on-farm workshops focused on seasonal flower production and natural floral design as well as a six-week online course to teach flower lovers around the world how to grow, harvest and sell seasonal flowers on a small scale. Their online shop sells their favorite cut flower seeds, bulbs, supplies and gardening tools. Benzakein is most excited for the recent purchase of a 25-acre farm next door, which will include a new peony field of 3,000 peonies and 100 different varieties.

3rd Photo - arrangement in the shop

Pull quote: “I quickly discovered that nearly everyone struggled with the same things I had: how to approach color, basic mechanics, proper ingredient selection, and most importantly, confidence.” Erin Benzakein

Benzakein is about to release her second book, A Year in Flowers, in April. When asked what made this book different from her first, she responded, “I quickly discovered that nearly everyone struggled with the same things I had: how to approach color, basic mechanics, proper ingredient selection, and most importantly, confidence. After teaching hundreds of students how to create natural looking arrangements, I developed a tried-and-true process that reduces the guesswork and results in beautiful bouquets every time. In this book, I detail the basics of getting started with floral design, key ingredients, essential techniques, and ideas for every season.”

She is passionate about people connecting through flowers. Her new book will allow the everyday artist to come alive in their very own home and way, unlike her first book, Cut Flower Garden, which was about growing flowers. She says, “A Year in Flowers is not just an invitation to incorporate local blooms into life’s biggest milestones and everyday events. It’s also a salute to the many dedicated farmers who work tirelessly to grow beautiful flowers for their local communities.”