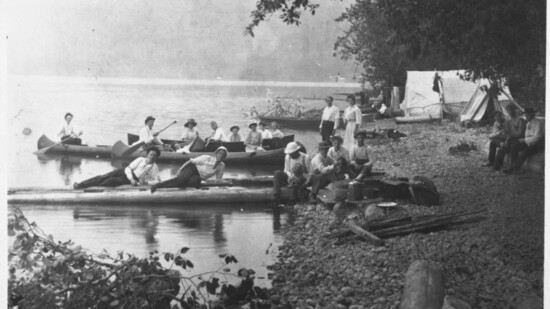 A History of Summer Fun

Summer community events have suffered because of the Covid-19 Pandemic. But the memories and histories of the fun events of the past are easy to locate for anyone with a penchant for local history.

The Eastside Heritage Center and other local historical organizations maintain interesting collections of photographs, stories clipped from old newspapers and memorabilia documenting how we celebrated in the past.\

Indeed, many of these events actually helped the towns of the Eastside grow.

The Bellevue Strawberry Festival put what was once a sleepy village centered around today’s Old Main Street on the map. It began in 1925 after Jenny Bovee dreamed about a festival to promote the Bellevue farmers’ main crop – strawberries. Grown mostly by Japanese families, the strawberry fields then covered much of what is today’s downtown and Overlake areas.

That first year, strawberry shortcake and other booths were enjoyed by 3,000. Back then, attendees from Seattle either had to take a ferry or drive around the lake – there were no bridges. The Festival continued each June as a highly successful event until World War II when Japanese families were sent to internment camps and the fields lay fallow.

The Heritage Center revived the Strawberry Festival early this century, although the event has been on hiatus recently. Prized among the many artifacts in the Eastside Heritage Center collection are photos from early festivals and even old berry baskets from the 1920s-30s.

The Covid pandemic has put the long-standing Bellevue Arts Museum Art Fair – one of the centerpieces of the local summer scene – on hold. (There will be a virtual fair July 21-August 4 to showcase artists work.) Similar to the Strawberry Festival, the Bellevue art fair began as a marketing ploy but transformed into a wonderful annual event.

As World War II ended, Bellevue Square rapidly took shape. One of the highlights of what was then an open air shopping center was the Crabapple Restaurant. Carl Pefley, the restaurateur, asked the architect to create wall space to display local artwork. Pefley and his wife, Pat, said an outdoor art fair would help bring people to the shopping center. The Pefleys invited local artists to not only display their work, but to demonstrate, too. There were 70 artists and 30 volunteers to help run the first event in 1947. At least 30,000 people attended. Lunch was available at the Crabapple and at a patio location staffed and served by members of the Overlake Service League. (The League continues to operate to this day but is now called Bellevue LifeSpring.)

The large crowd surprised organizers who knew a good thing when they saw it. They moved quickly to form the Pacific Northwest Arts and Crafts Association, incorporating in October of 1947. By the 1950s, it became “the in-thing” for Bellevue residents to brag about volunteering at the Fair. The Square provided space for the Association to host a year-round display area – called the PANACA (Pacific Northwest Arts and Crafts Association) Gallery and the Association eventually established the Bellevue Art Museum, leading to the 2001 opening of the landmark red museum building in downtown Bellevue to serve Eastside art patrons.

In both Kirkland and Bellevue, Fourth of July celebrations also dominate the summer calendar.

In Bellevue thousands of people converge in Downtown Bellevue Park. A children’s area entertains families during the day and when evening begins, orchestra concerts provide entertainment until it is dark enough for fireworks. As of press time, the Downtown Bellevue Association website said the event was on hold for 2021.

In Kirkland, the annual Fourth of July parade and family festival is also on hold. But Kirkland may have the record for the earliest Independence Day celebration on the Eastside. Pioneer Harry French held a picnic with friends on July 4th, 1881. The Kirkland Heritage collection includes papers and photographs from many early residents, including the French family. By 1919, Kirkland was the place to celebrate the Fourth – the town had the three big Ps – a parade, a picnic and pyrotechnics – fireworks.

In the late 1940s Kirkland event organizers added a fourth P - pigs. During one summer event, there were pig races. Not just any pig races – these pigs were sent down chutes- or slides – into the lake. Teenage girls were recruited to be in the water and herd the pigs ashore.

With the end of the pandemic in sight, fun, community-building festivals could be making a comeback. Both Kirkland Heritage Society and the Eastside Heritage Center, like most historical groups, depend upon volunteers and contributions to maintain their collections. To help preserve local history, please share your time and make a financial contribution.

Only open for research by appointment