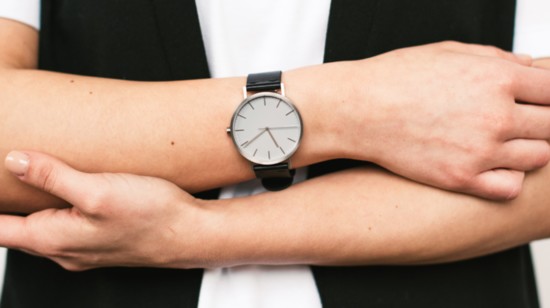 After launching its first prototype in 2014, Hodina, a local watch company based out of Bellevue and born of a family trade, has grown into a thriving, modern-minimalistic lifestyle brand.

Founder Vadim Bozhko, the youngest of five, moved to the US with his parents and siblings from Ukraine before he was even a year old. Escaping persecution for the chance of a better life, Vadim’s family settled into their new home in the Pacific Northwest, and his father, Vladimir, opened a watch repair shop in 1995, which is still running today.

“They experienced a lot of horrendous things,” he says, “and it’s really given me a deep gratitude for what I have now. ”

As his older siblings pursued other ventures, it didn’t seem likely that anyone in the family would take interest in the nostalgic legacy of watch repair. Even when Vadim first approached the idea of making watches, his father wasn’t too sure about the whole minimalistic approach to design.

“He has more of the engineering, business mindset,” he explains, “but now he gets it and he’s really excited and proud of what we’re doing.”

Vadim and his father still work closely together, conferring on ideas and business practices. Vadim’s wife, Dasha, is also involved in the business, and with an expanding product line, the couple is excited to see what’s next for Hodina.

How did you get into watchmaking?

My dad was a watch repair specialist, and he had his own shop with a couch in the back. In preschool, my bus would actually drop me off there, so I spent a lot of hours from a young age immersed in watches. I wore wristwatches to school, started collecting vintage ones, and eventually, my dad and I began to restore old watches swapping around parts and components, which really piqued my interest for design.

Although I pursued a different career path initially, my passion for design and minimalism has only grown stronger over the years and just seemed to fit really well with my deep-rooted background in watches.

I began playing around with early prototypes as a hobby, which then turned into more of a side gig and eventually became a full-fledged business!

Where did the name “Hodina” come from?

After a lot of prototyping, we launched our first watch model as something of a case study using the name “V Watch Co,” which wasn’t really thought out. When the watch sold really well proving that we had a viable business on our hands, we quickly realized we needed to take it to the next level with our branding, suppliers, and especially a company name that better matched our story.

The word “Hodina” is a Ukrainian word meaning “hour,” which ties in with both our family heritage and growing up around my dad’s watch repair shop. A phrase we use, “own the hour,” is also a play on the word and connects with our brand from the minimalistic perspective of living simply and in the moment.

What else does the brand stand for?

The Hodina brand really reflects my own personal lifestyle, which I think a lot of people can also relate to. It’s a “less is more” mentality, promoting the idea of priorities and what really matters in life. We only have one life, and time is precious, so I think that everyone should take the initiative to live his or her best life.

Hodina accessories are geared for the trendsetter who loves quality at a fair price. All of our products are limited edition, and we really like that sense of exclusivity. The watch market is one that’s starting to become really saturated, and we’ve found that our customers want something unique and timeless that not everyone else has.

Also, most of our watch models are named after familiar locales, such as the Alki, the Bellevue being one of our most popular models. We like the idea of staying connected to our roots, our local story and the community where we’re based.

We begin creating prototypes in 2013, trying out different things to see what worked, what didn’t. I was also two years into a career at Boeing when we finally launched our first model late in 2014.

In 2015 we officially launched Hodina as a brand, and I started spending a lot more time on development and growth. However, my vision has always been strategic growth, quality versus quantity, and we’ve needed to maintain the ability to fund it. So, pretty much the entire time I’ve been running Hodina, I’ve been doing it on the side of a full-time job.

I was finally able to leave the corporate space last year to focus completely on Hodina and freelance design work, and we still operate, stock and ship everything from home!

Where does your inspiration come from?

A lot of our watch designs are inspired by natural elements, such as industrial brushed textures and finishes, and we focus on finding really high-quality materials, like sapphire glass and leather straps that are both soft and durable.

We’re all about simplicity and minimalism, nothing obtrusive that gets in the way.

I’m currently designing a watch with a case shape inspired by the curving contour of a stone I found while skipping rocks on the beach with my wife. The shape was so smooth and comfortable, flat and rounded, and the beauty of it really struck me. I thought, 'I want to bring that to life.'

As you look to the future, what has you the most excited?

We have a lot of cool things we’re working on, including a collaboration with Minimalissimo, an online and print magazine exploring everything from architecture to fashion with a minimalistic approach to design.

I approached them with the idea to co-create a limited edition watch, so we’re getting ready to launch a Kickstarter. It is by far one of our best works, something really special. Every detail has a purpose, and I’m really excited about it.

Beyond that, though, we’re very intentional. We don’t want to grow too much too fast, nor lose sight of who we are or our passion. If we can still grow and hold onto the fashion, the craft, and importantly the story, to me that would be really cool.